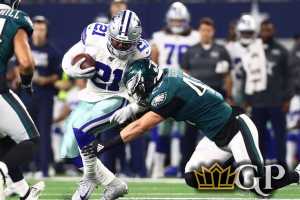 Don’t laugh, it is a battle for first place in the NFC East on Sunday night, as the Dallas Cowboys visit the Philadelphia Eagles on NBC. Let’s look at the game between the Cowboys and Eagles and Sunday Night Football picks.

Don’t laugh, it is a battle for first place in the NFC East on Sunday night, as the Dallas Cowboys visit the Philadelphia Eagles on NBC. The Cowboys are 2-5 and a half game behind the Eagles who are 2-4-1. The Eagles are coming off a win over the Giants, while the Cowboys are coming off a humiliating defeat to Washington. This is definitely one of the uglier matchups on Sunday Night Football in some time with the Eagles listed as a 9-point home favorite. Let’s look at the game between the Cowboys and Eagles and Sunday Night Football picks.

The Cowboys have been decimated by injuries this season, particularly on the offensive line and their offense is simply not moving the ball. It doesn’t help that Dak Prescott is out for the season due to injury, but Dallas still has Ezekiel Elliott and some very talented receivers. The problem for Dallas is that their offensive line can’t protect Dalton and they are not opening holes for Elliott. The Eagles have not been that much better, as Carson Wentz has been inconsistent and his offensive line has given up 28 sacks. The Eagles are without both of their tight ends and their receiving corps is dealing with injuries. Wentz has made some poor decisions this season but last week he was able to lead the Eagles to a comeback win against the Giants.

Dallas traded defensive end Everson Griffen to Detroit earlier this week, signaling to many that they have thrown in the towel on this season. Griffen was second on the team with 2.5 sacks and third in QB pressures with 14. The Cowboys may get Sean Lee (groin) and Chidobe Awuzie (hamstring) back from injury soon and it looks like Zack Martin may return this week. Andy Dalton was still in concussion protocol on Wednesday so his status for Sunday is in question.

The Cowboys may be forced to go with Ben DiNucci at quarterback. He is a seventh-round draft pick out of James Madison. "If you would have told me a year ago that this is where I was going to be in a year, I think I would say, 'No way.' You'd have to pinch me," DiNucci said to the media, "But here we are. It's 2020. No one really knows what to expect the next day, let alone a week down the road." DiNucci threw for 3,441 yards with 29 touchdowns and six interceptions in 2019 with James Madison.

"Ben's been up here relentlessly in the last 48 hours. He's pouring everything he personally can into this opportunity that may be in front of him," coach Mike McCarthy said to the media, "He'll get pretty much all the work this week because I don't see Andy coming back (until) at the end of the week at the earliest."

I have been rolling with my totals of late, having hit again last week with the Bucs and Raiders over. I like the total again this week, but I also think the side is worth playing. I know the Cowboys have been terrible of late, but I have no confidence at all in Wentz and the Eagles. Dallas has been hearing all week about how rotten they are and I expect an inspired performance on Sunday night. I will take the Cowboys plus the points. I also can’t see either offense doing a great deal, so I will go under the total.