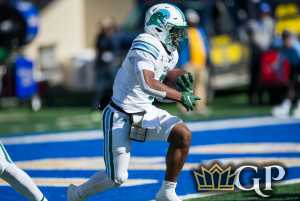 We took Week 10 off in order to recharge our batteries heading into the homestretch of the college football season. We are looking for a big Week 11 with five games to take a look at. Let's look at Week 11 NCAA Football Picks.

We took Week 10 off in order to recharge our batteries heading into the homestretch of the college football season. It hasn’t been a great (or even good) year for us until this point, but we have redoubled our efforts and are looking to close out the campaign on a high note.

The Green Wave went 2-10 last season, but they are the best team in the AAC this year. Tulane is currently 8-1 and would essentially lock up a berth in the AAC Championship Game with a win over UCF this week. Michael Pratt has shown improvement with his decision making through the air, and the defense is one of the best in the Group of Five. The Green Wave are allowing 19.0 PPG and 4.9 yards per play.

This isn’t a good matchup for UCF. The Knights don’t have a very dynamic passing attack, as John Rhys Plumlee is more of a runner than a passer. Gus Malzahn continues to play him though, as he likes to have a mobile quarterback in his offense. Plumlee is UCF’s leading rusher, but Tulane has a front seven that can shut down opponents.

Under 41 in San Jose State at San Diego State

San Diego State is one of the hardest teams to watch in college football. The Aztecs play very sound defense under Brady Hoke, but there are high schools with more developed passing attacks. They are averaging just 17.3 PPG and 287.4 YPG this season, and senior Braxton Burmeister was averaging just 3.7 YPA before giving way to Jalen Mayden. This offense has been a little better with Mayden under center, but four of SDSU’s last six games have finished with 40 points or less.

Points will be at a premium against San Jose State in this game. The Spartans haven’t surrendered more than 24 points in any game this season, and they have struggled to move the ball at times too. Opponents are averaging just 3.3 YPC against this front seven.

At the start of the year, only the most diehard fans would have believed that Illinois would be the frontrunner in the Big Ten West in mid-November. The Fighting Illini have thrived off Bret Bielema’s formula off of running the ball and playing good defense, and a win over Purdue would make them the odds-on favorites to win the division. Chase Brown has been a workhorse with 257 carries for 1,344 yards and five touchdowns, while Syracuse transfer Tommy DeVito is completing 71.8% of his passes for 7.4 YPA with 14 touchdowns and two interceptions.

Purdue is constructed the other way. The Boilermakers take to the air often under Jeff Brohm, and Charlie Jones is one of the conference’s top receivers with 83 catches for 944 yards and nine touchdowns. As long as Illinois can limit Jones, they should be able to cover this game.

This hasn’t been a great year for Navy football, but service academies have an excellent ATS record as a double-digit favorite by the CFB betting odds. The Midshipmen will keep the ball on the ground and burn clock, and that should allow them to keep this game close even though they are very unlikely to pull off the upset.

Meanwhile, this is a potential letdown spot for Notre Dame. The Fighting Irish are coming off a huge win against previously unbeaten Clemson last week. Drew Pyne is not a great quarterback, so this game could become a grind if Pyne struggles.

The Georgia Bulldogs are coming off a big win last week too, but this is a team that they should dominate. Mike Leach’s offense has had no success against Nick Saban’s defense since Leach took over at Mississippi State, and it’s hard to imagine that would be different against Kirby Smart.

Georgia should be able to dominate the line of scrimmage on both sides of the ball and wear down Mississippi State (especially on defense). The Bulldogs will rip off big chunks of rushing yards in the second half on their way to a win and a cover.