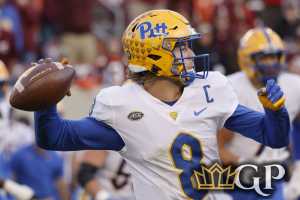 Another poor showing last week with my college football picks producing a 2-3 ATS record to move us to 3-6 ATS the last two weeks. It’s time to dust ourselves off and get back to picking more winners than losers. Here are Week 8 College Football Picks.

Another poor showing last week with my college football picks producing a 2-3 ATS record to move us to 3-6 ATS over the last two weeks. These aren’t the results we signed up for! But at least we got our revenge against Georgia after Kentucky found a way to kick in the backdoor in the game’s closing moments. The BC selection proved to be wretched with the Eagles failing to tally another point after tying it up at 7s in the first quarter. The over in Knoxville never stood a chance. And then there was the big bet on the Arizona State Sun Devils who took a 21-7 lead into halftime and lost 35-21. Basic math shows they got outscored 28-0 in the second half. What happened to playing to win the game Herm?! Thankfully, Nevada held on to cover the 2 TD spread versus Hawaii to lessen the overall damage my bankroll incurred on the day. With that, it’s time to dust ourselves off and get back to picking more winners than losers. The following are my top rated selections for Week 8 of the college football betting season - hope you’re in the mood to eat some chalk!

You have to go all the way back to October of 2016 to find the last time Dabo Swinney’s kids went off the board dogged in the regular season. Clemson won that game over Louisville 42-36 as 1-point pups in case you wanted to know. Absolutely nothing has gone right for the Tigers this season with losses already incurred against Georgia and NC State. Their three conference wins over Georgia Tech, BC and Syracuse came by an average of 5.0 points per game. They went off the board favored to win those games by an average of 18.5 points! Needless to say, they failed to cover all three and enter this tilt with the Panthers a bankroll killing 0-6 ATS. PITT has been embarrassed each of the last two times it opposed Clemson. That won’t be the case this time around with Narduzzi’s kids out to lay the hammer down!

Why don’t online sportsbooks post team totals right away? Currently, I can bet the Rebels first and second half totals but not the full game; it makes no sense! Regardless, I fully expect the “Lane Train” to be throttled up for the Tigers come Saturday afternoon. LSU is a program in flux right now, and it’s just so happened to beat up on the Rebels the last four seasons. It’s time Ole Miss got some redemption! Matt Corral is going to make minced beat of the Bayou Bengals’ No. 85 ranked scoring defense, and I don’t give a you know what about him being nicked up. This game has been circled as one that must be won at all costs, and I fully expect the Rebels to go above and beyond letting LSU know it won’t be pushed around any longer.

This is a huge game for the Clones with a repeat trip to the Big 12 title game there for the taking and three of their final five games set to be played away from Jack Trice Stadium. Since dropping a tough 31-29 decision to the Baylor Bears in Waco, ISU has taken care of business against both Kansas schools both at home and on the road. It enters this crucial test with the Cowpokes fully healthy; it’s now or never for Brock Purdy and company to tame the nemesis that’s proved to be OK-State who won and covered last year’s tilt in Stillwater to move to 8-2 SU and 5-4-1 ATS in the last 10 meetings. I seriously have no clue how Oklahoma State is undefeated right now. The team is the exact definition of the term “lucky.” Just check last week’s box score against Texas, and the ones against Boise State and Tulsa. It’s time the shenanigans came to an end!

Though Carson Strong and company came through for us last week, I simply have no choice but to fade them in this spot against a Bulldogs outfit that boasts the better of the two defenses by far. Nevada’s No. 92 ranked pass defense won’t have any answers for Jake Haener and the Bulldogs No. 8 ranked passing attack. On the flipside, Romeo Doubs is going to find the navigation extremely tough running up against Fresno’s No. 20 ranked pass defense. On top of all that, the Bulldogs are going to be able to run the football with ease. This numbers short and almost too good to be true! Regardless, I’ll buy in and expect Fresno State to leapfrog Nevada in the MTN West standings once the clock reads double zeroes – Slam Your Man!