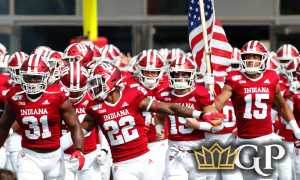 I fell below the Mendoza line for the season after putting forth a nauseating 1-3 ATS showing last week. The under play in Cincy/Tulsa was no actioned after the game was cancelled. So, we lost a play on the over in the Duke/NC State game even though two punts were blocked and returned for touchdowns. Looked good at the half with 34 on the board, but the Dookies pissed down their leg in the second half and failed to score a single point. I have no clue what went down in South Bend. Louisville’s defense had hemorrhaged points in every game yet held the Irish to 12? Brian Kelly and Ian Book got some ‘splaining to do! Ole Miss didn’t show up until it was too late; the over never had a chance. Thankfully, the night closed with our lone winner on Florida State who took it to UNC right from the outset and scored the first big win of the Mike Norvell regime. No excuse for an 11-12 ATS record to this point – lets cash these Week 8 college football picks!

Man I hope this QB Petras kid is the goods! Kirk Ferentz has an offense at his disposal with RB Tyler Goodson, OT Alaric Jackson and WRs Ihmir Smith-Marsette and Brandon Smith all back in the fold. All the unit needs is a straw to stir the drink. Where the Hawkeyes have major question marks is on the other side of the ball where six starters must be replaced from last year’s stout unit. Though Jeff Brohm won’t be on the sideline for this game due to recently testing positive for COVID-19, his bro should be readily able to administer his plan of attack. The return of Boilers’ WRs David Bell and Rondale Moore are sure to test the Hawkeyes retooled defense after doing so last year. PU’s defense has question marks up and down the roster. It’s also switching to the 3-4 under new DC Bob Diaco. I expect this to be a fun back and forth affair with both offenses owning the upper hand. This one looks primed to get into the 60s!

Micah Parsons opting out of 2020 will be felt by the Nittany Lions right from the outset. Running up against Michael Penix Jr. will be a tough chore for PSU’s revamped defense out of the gate. Indy outgained the Nittany Lions in last year’s meeting in Happy Valley by 90+ yards, but turnovers ultimately did them in. PSU ranked No. 62 in explosive pass defense last season and loses a ton on that side of the ball. If Indiana’s offensive line is able to withstand the strength of PSU’s defense up front, the Hoosiers are going to flourish from a good load of offensive success. With Indiana home based and PSU traveling in the “New Normal” for the first time paired with Ohio State paying them a visit next week, I can’t help but take the points and expect Tom Allen’s kids to finally earn a huge program defining win.

The Fighting Irish have the offensive line to humble PITT’s strength up front along the defensive line. After struggling mightily to get anything done offensively against the Ville, I’m expecting a steady diet of running from Notre Dame to set the tone of the game right from the opening kick. Once some success is achieved and points hit the board, the playbook should open up for Book to take advantage of a Panthers secondary that’s bled yardage to opposing passing attacks (No. 82). Joey Yellen will only be making the second start of his collegiate career. He got no help from his ground game last week in Miami, and I don’t expect him to get much relief this week either running up against ND. I foresee a number of three and outs for the PITT offense which will dramatically hinder the strength of the team from competing against the Irish’s offense a full four quarters. Look for ND to dramatically improve upon its No. 56 ranked offensive red zone scoring percentage and win this game by a minimum of two touchdowns.

OK-State shouldn’t be favored in this matchup regardless of it taking place in Stillwater. This is a huge step up in class for Gundy’s kids who’ve gotten the benefit of squaring off against Tulsa, Kansas and West Virginia to start the season. All three of those teams have offensive yard per point rankings of No. 58 or worse! Only 75 teams have played football games in the FBS this season; do the math! Matt Campbell’s kids clock in at No. 39 but Brock Purdy and company have yet to get it going. We got a glimpse against OU, but I’m of the belief that was just the beginning. Bottom line, the Cowboys enter this tilt an overrated football team at No. 6 in the country. While Spencer Sanders is expected to be back under center, he’s yet to be tested this season. Since falling to the RAGIN’ CAJUNS Week 1, ISU has handled its business against TCU, Oklahoma and Texas Tech. If the Clones stout run defense (No. 13) is able to prevent Chuba Hubbard from going HAM, I still don’t think Sanders will be able to take enough advantage of ISU’s leaky secondary (No. 52) to bring this one home. Look for ISU’s pressure defense to step up when it matters most and help the team secure an enormous win away from Ames!