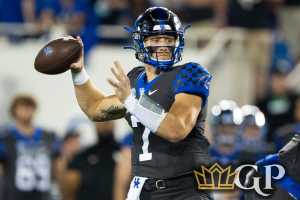 Not the greatest of showings for the debut of my college football picks going 1-3, but there’s still plenty of season left to fatten up the bankroll at online sportsbooks. Here are my top rated selections for Week 7 of the college football betting season.

Not the greatest of showings for the debut of my college football picks. It took a last second win by the Virginia Cavaliers to prevent me from taking a bagel (1-3 ATS). However, losses with the Texas Longhorns and Nebraska Cornhuskers were very tough to swallow. You know what I’m talking about if you took the games in live. The lone flat-out loser proved to be the Auburn Tigers who were never in a position to cover the 2+ touchdown spread. Turn the page and move on; there’s still plenty of season left to fatten up the bank roll at online sportsbooks. The following are my top rated selections for Week 7 of the college football betting season.

I guess I’m a glutton for punishment. The Dawgs look every bit as good as their #1 ranking indicates. The defense is relentless and the offense is much better than average across the board. Even with Stetson Bennet at the controls much to my chagrin last week. However, this Kentucky team has grit. It has moxie. It takes no guff from anyone! On top of that, it’s competed with Georgia each of the last two seasons covering both imposts in 21-0 and 14-3 final scores. This is simply too many points for UGA to be laying coming off a big win against the War Eagle with the “World’s Largest Outdoor Cocktail Party” next up on the docket. Gimme the points!

I’ve made it a point to hit the Rebels team total over in every single one of their played games to date; it’s gone 5-1 thus far. I fully expect the “Lane Train” to continue motoring in this trip to Knoxville with Matt Corral looking to pad his stats in his effort to win the Heisman Trophy. But after watching Arkansas zip through its defense last week both by land and by air, I’m of the belief there’s more value banking on both squads denting the scoreboard instead. The Vols own the nation’s No. 7 ranked rushing attack. It should be able to do as it pleases. In a matchup of offense’s that own YPP averages ranked amongst the top-25 and defensive YPP averages ranked No. 97 and No. 67 respectively, look for both teams to run offensive clinics!

BC has had two weeks to sit and stew about the lost opportunity it failed to take advantage of versus Clemson. While the Wolfpack did manage to get the best of the Tigers in its matchup earlier this season, I still have the Eagles pegged as the better overall team and they’re catching a field goal on their own turf. I truly believe the wrong team is favored here, and it has everything to do with each squad’s end results versus Dabo. Chestnut Hill will be rocking for this primetime battle and I fully expect the home team to feed off the energy and score the outright win.

I already made the mistake once of backing the Sun Devils in Mormon country earlier this season and paid for it. Again, I’m a glutton for punishment. However, ASU killed itself in that 27-17 loss to BYU by committing an absurd 16 penalties and turning it over four times. This Utah team is not very good. It had been underachieving up until the last few weeks, and only just logged its first point spread cover last week against the ghost of the USC Trojans. I’m not buying it! Jayden Daniels is a dark horse Heisman contender in my opinion, and I truly believe Herm Edwards overlooks the best team in the Pac-12 by a country mile. It’s up to them to bring that train of thought to fruition. Look for ASU’s defense to simply be way too much for the Utes inefficient offensive attack, and for Sun Devils unforgiving running game to keep Utah at an arm’s length over the game’s entirety. Best Bet ASU!

Many might be hesitant to lay the two touchdowns with the Wolf Pack after they failed to see last week’s romp of New Mexico State all the way through. After getting up 52-7 with a fourth quarter left to play, it took the foot off the gas and allowed the Aggies to kick in the backdoor as 28-point favs. Don’t let that stop you from hammering them this week against Hawaii. Carson Strong and Romeo Doubs are the best QB/WR tandem you’ve never heard of. The Rainbow Warriors can’t defend the pass (No. 119). Look for Nevada to bomb away all game long and get ahead of the number quickly. Only this time, they’ll get the job done for their boosters and wagering supporters – Slam Your Man!