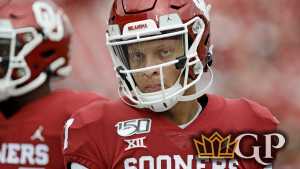 Week 6 College Football Picks are ready to roll. I bounced back with a nice winning week, so I will look to continue the momentum with five picks, including Oklahoma vs. Texas.

I bounced back nicely with a profitable card this past week. It was much needed after the carnage my bankroll went through the previous week. All three side selections cashed in with each underdog also going on to win outright. Ole Miss logged its first triumph of the Lane Kiffin era by coming out on top of an overtime barnburner with Kentucky. West Virginia also got the job done for us in overtime, but poor late-game execution and a number of head scratching turnovers both on offense and special teams allowed for the game to be much closer than it should’ve been. The night closed out with a huge outright win with Arkansas who went into Starkville and silenced the Bulldogs as enormous underdogs. Unfortunately, the combined score fell way short of going over the number. That moves us to 8-6 ATS through the first five weeks of the season. Hopefully the football gods smile upon my Week 6 action as well!

Texas was lucky to escape with a win in its Big 12 opener after Sam Ehlinger led the team back from a 15-point fourth quarter deficit to log the 63-56 overtime win. Then last week, the Longhorns allowed TCU to rack up 457 combined yards and 25 first downs with 226 of those yards coming on the ground; a week removed from allowing the Red Raiders to go for 325 yards through the air. Bottom line, the Horns defense is a sieve. It’s gotten limited pressure on opposing QBs as well evidenced by tallying a grand total of three sacks through three games. On top of that, it owns the exact same 3-3-5 defensive makeup that Iowa State employed in their upset of the Sooners last week. Spencer Rattler still went on to throw for 300 yards and 2 TD ISU in the defeat. Look for him to eat in his first taste of the Red River Rivalry and lead Boomer Sooner to a third straight win over their hated rivals.

It’s been a struggle for UNC through its first two games against Syracuse and Boston College. The Eagles had a shot to push last week’s game to overtime, but saw its 2-point conversion attempt with less than a minute remaining returned the other way to allow UNC to escape Chestnut Hill with the 26-22 win and non-cover. The effort followed needing a second half explosion to dispose of the Orange as huge home chalk. Sam Howell got all kinds of Heisman hype coming into the season, but it’s proven to be unwarranted through his first two starts. Bottom line, the Hokies will own the advantage in the trenches on both sides of the ball. With that, I fully expect Khalil Herbert to continue running wild regardless of the Heels owning the nation’s No. 1 ranked rush defense. This will be its first test against an opponent that excels at rushing the pigskin, and I expect them to fail - UNC is overrated and VTECH is hungry!

The Canes have been my kryptonite. I faded them against both Louisville and Florida State and ended up turning the games off before halftime; I never had a shot of cashing either ticket. If you can’t beat ‘em, join ‘em! I’m buying into the new-look Hurricanes with D’Eriq King proving to be the missing ingredient to put Manny Diaz’s kids on the precipice of becoming a major factor in the race for the CFP. This is the ultimate litmus test running up against a Clemson Tigers program that’s gone on to compete for the national championship in all but one year of its existence. I’m a huge proponent of backing underdogs that excel at running the football and have a defense to back it up. With Cam’ron Harris running like a runaway train, I can’t help myself but take the two touchdowns and pay up to see if Clemson proves to be Miami’s kryptonite.

The Gators offense has looked tremendous in a pair of wins against Ole Miss and South Carolina. In racking up 684 passing yards and a 10:1 TD/INT ratio, Kyle Trask has catapulted himself into the Heisman discussions; he’s currently a +700 dog behind both Trevor Lawrence and Justin Fields. While his love affair with Kyle Pitts will undoubtedly have A&M DC Mike Elko burning the midnight oil trying to concoct a way to keep the duo in check, I can’t help but think the Aggies put forth a circle the wagons type effort back at home after getting their lunch served up by Bama last week. As readily able Florida has been able to put points on the board, its defense has given them up just as quickly. Kellen Mond should be able to take advantage and give the 4th ranked Gators their money’s worth in front of the 12th Man with 25 percent capacity in attendance.

Though not included in last week’s piece, I was all over the Cyclones catching points against the Sooners last Saturday night. Matt Campbell’s kids absorbed every OU blow before taking the game over late in the fourth quarter to log the outright win. It was a great overall team effort to pull off the comeback win, but I’m expecting a bit of a letdown in this spot against a Texas Tech team that’s suffered successive losses of the gross variety after coughing up a 21-17 fourth quarter lead and fall in Manhattan to K-Suck. However, I won’t lock this side in until I know for certain that KeSean Carter and his 215 receiving yards and 4 TD will be on the field. ISU’s defensive Achilles Heel is against the pass (No. 55), so I need a full arsenal of Red Raiders to confidently take the points in this premiere hangover spot.