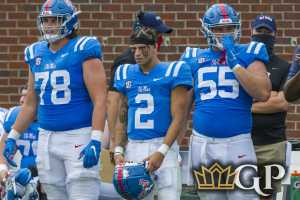 I made five selections on last week’s college football betting slate and only managed to cash a single ticket; one! And it was a lucky cash at that needing Florida to withstand a final minute 2-point conversion attempt and then buckle down on the goal line once again after Mississippi recovered the onside kick. The loss on Kentucky was a very tough one to swallow as the Wildcats outgained Auburn by 60 yards and held a 13+ minute advantage in the time of possession battle. It wasn’t as tough as the loss with West Virginia who allowed Oklahoma State to log the front door cover with just over a minute remaining in the game. Those three selections could’ve just as easily gone 3-0 ATS instead of 1-2. However, there was no excuse for the losses with Texas minus the points at Texas Tech and Florida State plus the points at Miami. Seriously, the loss with the Seminoles ranks out as one of the worst of my college football betting career. Hopefully I can do better in Week 5.

One of the main reasons I willfully laid upwards of two touchdowns with the Gators on the road in Oxford in their season opener was because of the Rebels breaking in Lane Kiffin’s new philosophies on both sides of the ball. While the defense was no doubt a sieve in allowing Kyle Trask to dramatically improve his NFL Draft stock by throwing for 416 yards and 6 TD, the offense looked like it adopted Kiffin’s plan of attack with relative ease. Florida had all kinds of issues preventing Matt Corral from ripping it apart through the air in allowing the junior to throw for nearly 400 yards and a 3:1 TD/INT ratio. Elijah Moore also catapulted himself into the upper echelon of wide receivers at the collegiate level by simply doing as he pleased against the Gators defense reeling in a total of 10 receptions and turning them into 227 scoreless yards. I just sat back and watched Bo Nix take advantage of the Wildcats defense to the tune of 233 passing yards and 3 TD with 112 of those yards and two tuddies going to Seth Williams. Corral and Moore should have themselves a good ‘ol time in this one to help put the Rebels in a position to not only cover, but win the game outright!

I’m going right back to the well with Neil Brown’s Mountaineers who had nobody to blame but themselves for coming up short in Stillwater last week. They won the yardage and time of possession battle over the Pokes with QB Jarret Doege throwing for 285 yards and a touchdown with wide receivers Winston Wright Jr. and T.J. Simmons combining for 209 receiving yards and a score. Heck, even Leddie Brown took care of business on the ground rushing for over 100 yards. The problem areas however proved to be an inability to stop the run and penalties. The defense allowed over 200 yards combined to LD Brown and Chuba Hubbard, while the team committed a sickening 12 penalties that accounted for 106 yards with most coming at the most inopportune of times. Baylor looked great in its season debut taking the wood to Kansas, but this trip to Morgantown will be a different animal. While Dave Aranda was a great hire to replace Matt Rhule, it’s going to take some time for his philosophies to marinate. This is year two of the Brown regime and I fully expect the Mounty’s to hold serve after dropping a tough one last week.

I knew once the clock reads double zeroes in Baton Rouge last week that I would be fading the “Mad Scientist” this week. I mean seriously, how could Mississippi State not suffer an enormous letdown in this ripe hangover spot a week removed from upsetting the defending national champions as 2+ touchdown underdogs?! The fact that public money has bumped the number to beat up makes the decision to take the points with the Hogs all the more easy. Though Arkansas ended up getting pasted 37-10 at home by Georgia last week, it still covered the closing pointspread. While the offense only managed to combine for 280 total yards, the unit was one of the quickest in the country in getting plays off by averaging less than 24 seconds per play. While the end results weren’t great against Georgia, Kirby Smart’s Bulldogs always possess one of the best defenses in the country. That’s not the case with the Dawgs who allowed a completely retooled LSU offense rack up 425 yards with a bulk coming through the air. If you can believe it, the Hogs seriously looked much improved last week; I foresee them hanging around in this barnburner.