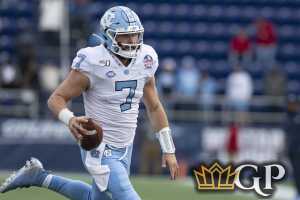 It almost feels like it isn’t real. The 2020-21 college football betting season has arrived, and online sportsbooks are stoked to book as much action as you want to throw their way. Football bettors have been clamoring for the season to start ever since Joe Burrow and the LSU Tigers put the finishing touches on the Clemson Tigers in the National Championship Game back in January. We don’t have to wait any longer! The following are the investments I’ll be making on this abbreviated Week 2 slate.

After going 6-6 and throttling Temple in the Military Bowl, the Tar Heels are being looked upon as the second best team the ACC has to offer. That’s some pretty high praise considering the top dog is Clemson who has won the ACC each of the last five seasons. Sam Howell had himself a freshman season after throwing for over 3,600 yards and a 38:7 TD/INT ratio. Now a year wiser and having a 1,000+ yard rusher in Michael Carter and a 1,000+ yard receiver in Dazz Newsome, UNC’s offense will be one of the most electric in the country. It’s a much different story for Dino Babers’ Syracuse Orange who had a number of expected starters opt out which casts some major doubt as to just how ready the team will be for the season opener. With so many new faces and a lack of practice time to get them situated, this one is going to get ugly real quick. While I hate that we have to lay over three tuddies due to line movement, it’s the only scenario I’m comfortable playing in this matchup.

David Cutcliffe is back calling the plays in Durham after his offense sputtered the last two seasons ultimately costing the program a third straight bowl appearance. While it’s without a doubt the lesser of the two teams in this matchup, I’m of the belief the Dookies fight tooth and nail to save some face after last season’s ugly 38-7 loss at home to the Fighting Irish. Yes, the Dookies are breaking in a new quarterback in Clemson transfer Chase Brice, but he’s got some nice pieces to work with in RB Deon Jackson and TE Noah Gray. Where both of these bets are won or lost however is with the Blue Devils defense. It simply had no answer for Ian Book in last year’s matchup. He threw for 181 yards and 4 TD and turned his 12 carries into another 139 yards. Stud pass rusher Victor Dimukeje and safety Michael Carter should make it much tougher this time around. Many expect a blowout to occur once again, but I’m in the minority. All the new faces Notre Dame must break in on both sides of the ball will ultimately prevent that from happening. Look for Duke to cover by the skin of its teeth and do so because the defense rose to the occasion.

The University of Texas is paying Tom Herman upwards of $6.7M to coach the team on a yearly basis. UT has amassed 7-6, 10-4 and 8-5 records throughout his stay in Austin. While each of those seasons ended in bowl game victories, the best came against a disinterested Georgia Bulldogs outfit in the Sugar Bowl. More is expected than that, so we’re now entering put up or shut up time entering the 2020 campaign. Luckily for him and his staff, this year’s version might be the best it’s been since he bolted Houston for greener pastures. With Sam Ehlinger back under center and about 25,000 screaming fans looking on – yes, UT is opening up Royal-Texas Memorial Stadium to 25 percent capacity – the Miners are going to be well up against it in this matchup. Texas possesses NFL caliber players up and down its roster. UTEP might not have a single one save for maybe RB Deion Hankins who went for 113 yards and 2 TD in last week’s win and cover against the Lumberjacks of Stephen F. Austin. You read that right? Win and cover yet they only won by 10? Against an FCS opponent that they had to come-from-behind to beat! Sorry, but this one is going to get ugly; quick! New OC Mike Yurchich couldn’t have gotten a better opponent to unleash his offense against if he handpicked it himself. Texas has beaten the Miners by an average of 40 points in the three meetings dating back to 2008. I wouldn’t be surprised if they matched that average by halftime!