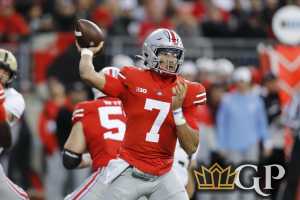 Week 12 College Football Picks are ready to roll. I had a 4-3 record in Week 11. Here are my top rated selections for Week 12 of the college football betting season.

Last week’s college football picks started off tremendously. Michigan and Penn State played to easy unders both in the first half and the full game. Wisconsin took the wood to Northwestern both in the first half and for the full game as expected. Then Tennessee took its opening drive right down the field for seven. Unfortunately, it would only score 10 points the rest of the way versus the Dawgs swarming defense and failed to cover the 20-point spread in a 41-17 defeat. Soon after, Texas A&M saw its SEC title hopes go up in flames after dropping a 29-19 decision at Ole Miss in a game it was shutout in the first half. Topping off another forgettable Saturday was the Nevada Wolf Pack who covered the 3-points at San Diego State but didn’t win outright; I recommended hitting the moneyline only. While the 4-3 ATS showing added to the bankroll, it still only moved this piece to 12-20 ATS through 32 selections. That simply won’t cut it! Hopefully this week’s recommendations do and we can finally go into a Sunday with a little more ammo to work with. Here are my top rated selections for Week 12 of the college football betting season.

I don’t foresee Sparty’s joke of a pass defense doing anything to prevent C.J. Stroud and company from lighting them up through the air. MSU ranks No. 130 defending the pass and has allowed 8.6 yards per pass attempt in its last three games against Maryland, Purdue and Michigan. Stroud just sliced and diced a decent Boilermakers pass D for 361 yards and a perfect 5:0 TD/INT ratio. He’s now one of the favorites to land the Heisman Trophy and will be looking to add to his resume. I’m going first half only here because I’m fearful of the Buckeyes taking the foot off the gas in the second half knowing full well what lies ahead next week. I don’t foresee any issues and expect them to take it to the Spartans early and often!

The betting markets look to be of the belief that the Bearcats have their hands full with the Mustangs on Saturday. I beg to differ! SMU possibly being without leading receiver Danny Gray has suppressed the total enough to the point that I’m salivating over the prospect of backing Desmond Ritter and his mates in a game they need to impress in. Currently on the outside looking into the CFP and Oregon heading into a bear trap in Utah, a showing above and beyond will do wonders for the team’s chances of jumping into the top-four should the Quack Attack slip up. This has window dressing makings written all over it, and I firmly expect Luke Fickell’s kids to push the throttle when given the chance – NO MERCY!

Yes, I’m still salty about the Deacs coughing up a surefire moneyline ticket cash in Chapel Hill a few weeks back. Yes, WF’s defense is still horrendous and that stench is destined to venture into Death Valley where Dabo Swinney’s kids will likely be chomping at the bit to hand this team another embarrassing defeat. The last five meetings between these programs read as such: 37-13, 52-3, 63-3, 28-14, and 35-13. You have to go all the way back to 2008 to find the last time Wake defeated the Tigers. While I get Clemson’s offense has been tough on the eyes all season, it should thrive in this matchup. On the flipside, Sam Hartman is likely to struggle against a defense that’s continued to bring it every passing week. I’d come away shocked if WF finds a way to win let alone cover this game!

How dare I fade an Aggies outfit in the midst of a heater that’s seen it win five straight and cover each of its last four! Forget that noise! I truthfully believe the wrong team is favored in this one regardless of the game taking place in Logan. Wyoming’s defense just played its ass off on the Smurf Turf last week and deserved to cover the 13.5-point spread regardless of needing a 74-yard garbage time touchdown to get back in front of the number; they were covering for 58:59 of game action! Utah State’s current win streak has come against a bunch of nobodies. The Cowboys defense thrives at stopping what USU’s offense does best; passing the ball. This is a coin flip game that isn’t currently lined as such. The Cowboys need a win here to improve their bowl chances and I think they snag it!

Good god has OKST played well above expectations to this point of the season! I never once figured Gundy’s kids being in the running for the B12 title, but here we are. I’m still not a believer regardless of it taking care of my bankroll the last time I got involved with one of their games in that trip to Morgantown where they handled the Mountaineers. While Texas Tech would never be confused with an above average football team, Lubbock always seems to wreak havoc on teams expected to win by substantial margins. In games it caught 10 or more points dating back to 2014, the Red Raiders clock in a moneymaking 6-1 ATS and lost five of those games by just over a touchdown on average. They’ve also covered each of the last five in this rivalry. With the Cowpokes possibly looking ahead to next week’s Bedlam matchup with the Sooners, look for the RR’s to give them all they could ask for and more come Saturday night - Slam Your Man!