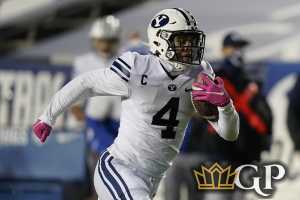 I am looking to bounce back in Week 12. It’s ride or die time peeps! It’s up to you if you feel like backing what I got to say or fade it in a big way. The ball as they say is in your court. Let's look at Week 12 College Football Picks.

I’ve been having nightmares about sitting down to write this piece all week. Hopefully rehashing the carnage that took place upon my bankroll will be cathartic if nothing else. For the first time all season, I failed to produce a single winning college football pick and it wasn’t pretty. The Minnesota Golden Gophers never stood a chance against Iowa. Boston College wasn’t able to take advantage of Notre Dame in a prime letdown spot. Michigan State got shutout by the Indiana Hoosiers. Rondale Moore didn’t end up suiting up for Purdue, and his absence was noticeable in a 27-20 loss to upstart Northwestern. Then there was Michigan; do I really need to rehash the butt kicking the maize and blue absorbed from Wisconsin? I feel shame but my bankroll took the brunt of it. The only thing left to do is roll up my sleeves and attempt to get out of the 20-23 ATS hole I’ve now dug for myself. It’s ride or die time peeps! It’s up to you if you feel like backing what I got to say or fade it in a big way. The ball as they say is in your court…

I can’t let this moneymaker escape my clutches any longer. It’s been a special season so far for Hugh Freeze’s kids who’ve gotten out to a perfect 8-0 start and covered the closing number all but twice. I snagged a little piece of Malik Willis and company a few weeks back at Virginia Tech as 2+ TD underdogs. They not only covered but won the game outright! The Wolfpack’s defense is on par with what the Hokies brought to the table in that game, but it won’t matter. This Willis kid is a special player, and he’s going to run roughshod against this opponent as well. Though Liberty hasn’t faced the same caliber of opposition as NCST, it’s in my opinion the far better of these two teams as evidenced by the betting line favoring NC State mostly due to its home field advantage; of which there will be none. We won’t need the points here, but take them just to be safe and sprinkle some beer money on the Flames winning outright as well.

With only two games remaining on the docket, Kalani Sitake is running out of opportunities to showcase his team for a run at the CFP. Unfortunately for the North Alabama Lions, they will serve as the sacrificial lamb leading up to the Cougars final game of the season at home against San Diego State; to be played on December 12. Yes, you read that correctly. This will be the last time CFB bettors will get to continue making bank riding the Cougars success, and I won’t be sitting on the sidelines once this game kicks off; regardless of the amount of chalk we’re being forced to eat. With what I’ve seen of the CFB landscape thus far, BYU deserves to be in the College Football Playoff. However, many still aren’t convinced. The only way to earn that bid is to continue putting video game-esque numbers on the board, and that’s exactly what I expect them to do in this spot. Wilson and company by at least a double nickel – Book It!

It’s the Bearcats and everybody else in the AAC this season. Sorry UCF, you simply just don’t cut the mustard in 2020. Luke Fickell ignored calls from bigger programs this past offseason to continue navigating Cincy’s ship into unchartered waters. The program has never been in a position to qualify for the CFP. With this being a COVID-19 marred regular season and the Bearcats owners of an unblemished record to this point, they stand as good a chance as any to snag a bid should everything fall into place. This Cincinnati defense is special and Desmond Ridder has been a pain in the neck for opposing defenses with both his arm and even more so his legs. UCF marches one heck of an offensive attack onto the field, but it will be negated by a Bearcats defense conceding less than 13 points per game. Defense is the Achilles heel of the Knights who’ve been torched on the ground (No. 88) as well as through the air (No. 93). I expect Ridder to cut through it like a warm knife through butter and for the defense to force a number of crucial turnovers that allows for Cincy to remain unblemished.

How in the hell did OU initially hit the board as 9.5-point favorites to win this installment of the Bedlam rivalry? It’s got nothing to do with OU coming in on extended rest because the Cowpokes shared the same bye week with their hated rival. Is it because Boomer Sooner has rattled off four straight wins since dropping successive games to K-State and Iowa State? Who cares! Bottom line, Oklahoma State is the rushing dog in this matchup that sports by far the better of the two defenses. Now I get that Lincoln Riley has gotten the best of Mike Gundy since taking over the program back in 2017, but streaks are meant to be broken. Oklahoma has been stout against the run (No. 14), but the 1-2 punch of Chuba Hubbard and LD Brown will be its toughest assignment to date. Spencer Sanders has also shown an ability to make some hay with his legs. I’m not entirely sold on Spencer Rattler either. Though his chemistry with Marvin Mims is undeniable, OK-State’s No. 8 ranked pass defense is no joke and I expect it to hold the upper hand. Oklahoma State knows full well this game must be won if it’s to have any shot of earning a bid to the CFP as the Big 12’s best team. I expect the Cowboys to be way up for this matchup and give the Sooners a major run for their money just like they did when they fell 48-47 as 21+ point underdogs the last time they invaded Norman.

It’s never fun getting in front of the runaway train otherwise known as the Boise State Broncos, but that’s exactly what I’ll be doing when they head to the islands to crack skulls with the Hawaii Rainbow Warriors to close Saturday night’s slate out. After getting their teeth kicked in by BYU, I knew hijinks were in store for Colorado State the following week. BSU went on to score every way imaginable. From defensive scores, to scoop and scores to punt return scores, Bryan Harsin’s kids did it all. Seriously, every time I looked up the Broncos put another score on the board. It’s been a rough start for the Todd Graham regime on the islands, but Hawaii always plays better at home and I truly feel the team as a whole is yet to get going. It has the hogs up front and a solid ball carrier in Miles Reed (4.8 YPC) that can take advantage of Boise up front. If Hawaii can somehow manage to prevent Boise’s lackluster ground attack from gaining chunk yards to routinely move the chains, it can control the pace of the game with its own running game. Should that occur, this spread will simply be too much for the visiting Broncos to conquer. Don’t be shocked when Hawaii finds itself in a position to pull off the upset. If the early action goes well, go for the knockout punch and hit the Rainbow Warriors on the money line to make it just a tad more interesting.