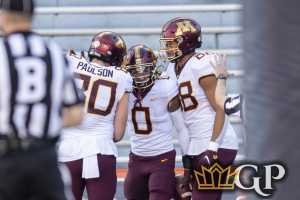 Week 11 College Football Picks are ready to roll. Let’s see if we can’t put forth a big week with one of my larger cards of year in Week 11. Here’s to cashing in big with this week’s installment of college football picks - Who Let The Dogs Out!

Notre Dame finally stepped up and won a big game with a ton riding on it regardless of it needing overtime and a little luck of the Irish to pull the feat off. With that, it cost me my only loss of the week after Arizona State lost a gutwrencher at USC but easily covered as double-digit underdogs and the Florida Gators made minced meat of the laughably favored Georgia Bulldogs. The effort moved me to 20-18 ATS for the season. Nothing to write home about, but being in the black is where you want to be at this point of the season. Let’s see if we can’t put forth a big week with one of my larger cards of year in Week 11. Here’s to cashing in big with this week’s installment of college football picks - Who Let The Dogs Out?!

No no no no no! Gross overreaction here with linemakers tabbing the Hawkeyes road chalk for this tilt. As impressive Iowa looked last week at home against Michigan State, it was an enormous letdown spot for Sparty after taking it to Big Blue the week prior. The Gophers are a much better team than their 1-2 record suggests, and they got a beast in the backfield in the form of Mohamed Ibrahim that they’ll ride to victory. Look for Minnesota to get the weekend started off right by winning this one outright under the Friday night lights!

You knew this was coming. Notre Dame has already failed to cover the heavy chalk against Georgia Tech, Louisville, Florida State and Duke. They enter this tilt off the programs biggest win in quite some time after upsetting the then No. 1 ranked Clemson Tigers in overtime. It’s only natural that they’ll let the guard down against a team they skunked 40-7 last year as near three touchdown favorites. This BC squad nearly defeated that same Tigers team in Death Valley two weeks ago. Armed with a much better QB under center that’s familiar with what Notre Dame does defensively having transferred over from South Bend and a much better run defense, this game won’t nearly be the same type of walk in the park it was for the Irish just last season. I plan on hitting the first half line instead of the full game just in case ND makes the necessary adjustments at the break to make things interesting when it matters most.

Mertz or no Mertz, I want nothing to do with the Badgers in this spot. It would be so much better if his last name was actually Merkts; ya feel me?! While Wiscy has been sitting back guzzling beers and chomping on cheese curds, the Wolverines have been busy getting embarrassed by Michigan State and Indiana the last two weeks. They’re going to come to play on Saturday in hopes of evening up the overall record and getting into the win column at the Big House. Joe Milton has impressed me through his first three collegiate starts regardless of his pass catchers doing him no favors by dropping countless passes. Fueled by the embarrassment of dropping two straight and being in better game shape than their opponent, look for the maize and blue to put forth its best effort of the season. This line should be a pick which has all the line value in favor of the desperate Wolverines. I’ll take the points but got a feeling we won’t need them!

Pregame, I’ll be taking the points with Sparty. After MSU got its bell rung in Iowa City last week, I firmly expect Mel Tucker to have his kids locked in. Indiana is susceptible through the air and the one thing Rocky Lombardi and the Spartans can do is sling the pigskin up and down the field. Look for Ricky White to have another big game after disappearing against the Hawkeyes last week. That said, should MSU get out to any kind of substantial lead, I’ll be looking to live bet the Hoosiers on the moneyline with the expectation they get out to a slow start off the big win over Michigan with Ohio State on deck. Figure they come back to win a 30-27 type game and escape East Lansing with the dub.

Northwestern has gotten out to an impressive 3-0 start by smashing Maryland, escaping Iowa in its first road test and then dismissing Nebraska even though they were outgained 442-317 and allowed the Cornhuskers to camp out on their side of the field for a bulk of the game. I’m still at a loss as to how the Fighting Fitzgerald’s won that game! Regardless, the unblemished record will be no more once the clock reads double zeroes in this matchup against Purdue with the top spot in the Big Ten West on the line. The Boilers have eked out a pair of wins themselves versus Iowa and Illinois, but they did so without the services of stud wide receiver Rondale Moore. Word on the street is that he’s suiting up for this game with the team refreshed and ready to go coming off an early bye. Even if he doesn’t go, Purdue will be jacked for this tilt with it the first to take place under the Ross-Ade lights. So long as the defense can stymy the Wildcats on the ground, I trust Jeff Brohm to cook something up offensively to get the best of another solid UNW defensive unit. Purdue should be the favorite in my estimation, so hit the moneyline instead!