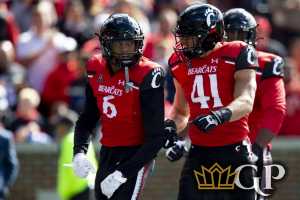 My college football picks should’ve added to the bankroll last week. But alas, the gambling gods laughed at me once again. The following are my top rated selections for Week 10 of the college football betting season.

My college football picks should’ve added to the bankroll last week. But alas, the gambling gods laughed at me once again. This time, they targeted the Florida State/Clemson game and allowed for the Tigers to score their first point spread cover of the year after the late-game lateral shenanigans afforded them the spread covering score in the closing seconds. FSU had that game covered for 59 minutes and 56 seconds. And for the record, I also lost with Northwestern against Ohio State in that infamous end-game finish back in 2013. One of these days a horse bleep ending like that will go my way! Anyway, the under calls in the Michigan/MSU game were awful, but the Georgia Bulldogs offset those losses with a skunking of the Gators. Wake Forest also had itself a good ‘ol time pasting the Dookies. The 3-4 tally moves us to 7-13 ATS over 20 total selections. Unfortunately we’ve given back some of the units won over the course of the MLB season, but there’s still plenty of time to get back in the black. Fingers crossed the comeback begins this Saturday. The following are my top rated selections for Week 10 of the college football betting season.

Lane Kiffin owes me! The dude coached like a clown in Auburn last week and cost his team the game. After giving up 4 TD to Bo Nix and company through the first half, his defense played out of its mind over the final 30 minutes only surrendering a field goal. Unfortunately, the offense was only able to match that output even though it lived on the Tigers side of the field throughout the second half. They failed to execute three of four 4th down tries! In comes a Liberty Flames team that will force the Rebels to put points on the board with Malik Willis showing time and time again that he can score on anyone. Matt Corral is sorely in need of a bust-out game after falling out of the Heisman race last week. Now a few weeks removed from getting banged up, he should be more than up to the task of exchanging points in a game the Rebels only find themselves favored to win by 8-points at the time of this writing.

PSU played its heart out last week in the Shoe testing the Buckeyes up until the final gun. Unfortunately, James Franklin’s kids only had enough gas in the tank for three quarters after getting blanked over the last 15 minutes to fall by a 33-24 final count. With that loss, Penn State now has no shot of winning the B1G East with Michigan, Michigan State and Ohio State the frontrunners. They by and large have nothing left to play for. They’ll go to a bowl, but it won’t be a big one. With that, why do they show up and paste a Terps team in search of that ever valuable sixth win with only one more home game remaining after this one? I don’t like the spot for PSU whereas Maryland will be going all out to defend its turf – gimme those points!

The selection committee more or less raised their middle finger at the Bearcats earlier in the week making it close to impossible for Luke Fickell’s kids to be a part of the College Football Playoff. Bad for the team, but good for their wagering supporters. I fully expect Desmond Ridder and company to come out determined to hang a crooked number on the board and take no mercy upon a Tulsa team that’s shown a knack for hanging with better teams like Oklahoma State and Ohio State this season. Especially with the Golden Hurricane only falling by 11 and three points to Cincy as 16 and 13.5-point underdogs the last two seasons. Tulsa will have 100 percent of the Bearcats undivided attention, and I thoroughly expect it to end terribly for the visitors.

A big ones set to go down in the Bluegrass State under the lights with the Kentucky Wildcats looking to snag two straight from the Tennessee Vols whom they destroyed 34-7 as 6.5–point Neyland Stadium underdogs a season ago. It’s redemption time! The Volunteers have owned this rivalry in taking seven of the last 10 both SU and ATS, and they own the rest advantage while KY Jelly enters off two straight beat downs at the hands of Hail State and Georgia. While Kentucky is yet to be defeated at home to date with wins in tow against Mizzou, LSU and Florida in conference, I just have hard time believing the offense will be able to keep up with the big plays certain to be accrued by the Vols with the Wildcats owners of a sickeningly bad passing attack. I have UT favored by a field goal here, so I’ll take the discount and run with it - Slam Your Man!