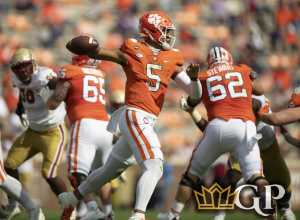 It is time for Week 10 College Football Picks, highlighted by the game between No. 4 Notre Dame and No. 1 Clemson. Here’s to hoping we can take it to the man with Week 10’s 3-pack of college football picks.

I ended up juicing out last week with a 3-3 ATS overall tally with the Texas Longhorns added late. We didn’t get the best of the number in Happy Valley and paid for it after the Nittany Lions fell to the Buckeyes 38-25 as 12-point dogs to fall to 0-2 for the season. The track meet expected between UCF and Houston didn’t play out after the Knights took advantage of numerous Cougars mishaps to keep the 65-point combined total well under the closing number. North Carolina was simply just a bad call; man the Tar Heels defense sucks! On the bright side, the money printing machine otherwise known as the Coastal Carolina Chanticleers continued to roll, while BYU had no issue putting a huge number up early to easily cover the first half spread. The addition of UT on Twitter also cashed after #HookEm outlasted the Pokes 41-34 in overtime. The 3-3 ATS tally moves us to an uninspiring 18-17 ATS for the season. Here’s to hoping we can take it to the man with Week 10’s 3-pack of college football picks.

2-2 SU and 3-1 ATS; those are Herm Edwards’ records when his ASU Sun Devils have been installed underdogs of 10+ points since arriving in Tempe back in 2018. 16-1 SU and 8-9 ATS; those are Clay Helton’s records when his USC Trojans have been installed home favorites of 10+ points since taking over the head coaching gig is Southern Cal back in 2015. ASU stands 3-4 SU and a moneymaking 5-2 ATS the seven times it went off the board dogged on the road under Herm’s watch. Bottom line, he gets his kids up to play when oddsmakers expect their opponent to take a dump all over them. As impressive USC’s roster looks at the outset of Pac-12 play, I also like the makeup of the Sun Devils with Jayden Daniels under center after throwing for over 2,700 yards and a 17:2 TD/INT ratio through 11 games last season. He takes care of the ball. Remember the name DeaMonte Trayanum; the D-Train is quite the specimen and will be unleashed. I honestly can’t believe Helton is still overlooking USC’s program. He continuously gets the least out of one of the most talented rosters in college football year in and year out. These teams played to a thrilling 31-26 final in a game won and covered by USC as 4.5-point favorites last season. Both meetings between these teams have been decided by an average of just 4.0 points per game since Edwards’s arrival. I’m expecting more of the same early Saturday morning.

I truly believe the Gators defensive showings against Ole Miss, South Carolina and Texas A&M have Georgia lined favorites for this year’s installment of the “World’s Largest Outdoor Cocktail Party.” Sorry, but Georgia has shown me absolutely nothing to believe it has what it takes to compete against Kyle Trask and the UF offense a full 60 minutes. I already watched Kirby’s supposed stellar defense wilt under the pressure of the Crimson Tide, and I’m expecting more of the same in this tilt. Stetson Bennett is hot garbage. He comes up with a few plays here and there, but is yet to prove to me that he can get the job done consistently. Florida got some major playmakers back on the defensive side of the ball versus Mizzou last week. The unit went out and stuffed the run and held Connor Bazelak to just 208 passing yards with most accrued in garbage time. This is a statement game for Mullen’s kids, and I fully expect them to rise to the occasion. When it’s said and done, Georgia backers will only be left scratching their heads wondering why the Dawgs even went into the game the favored side. Sprinkle some beer $$$ on the moneyline and hit Florida on the national championship futures odds before they’re drastically reduced next week if you haven’t already.

Don’t do it! Don’t entertain the thought of backing Notre Dame in this huge spot against the Tigers. Time and time again, we’ve seen the Fighting Irish crap all over themselves whenever they run up against upper tier opposition. To put it in perspective, ND checks in a laughable 4-40 SU and 11-32-1 ATS against the last 44 top-10 teams its run up against. This team constantly comes up short against the best of the best time and time again. After getting a scare from Boston College last week, you can bet your bottom dollar Dabo will have cooked something up for D.J. Uiagaleilei to succeed against the strength of Notre Dame which just so happens to come on the defensive side of the ball. I’m not a believer in Ian Book. When under duress, he either tucks it and runs or tries to fit the pigskin into tight windows. If he does that throughout this game, it’s a given Brent Venables will make him pay. Should the Irish finally find a way to rise to the occasion and buck the program’s recent ugly trend of constantly coming up short in big games, I’ll tip my hat in their general direction. Regardless, I’m paying up to see if they can pull it off!