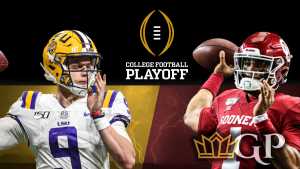 The first leg of the College Football Playoff kicks off in Atlanta, GA at Mercedes-Benz Stadium where the No. 4 Oklahoma Sooners find themselves installed double-digit underdogs for the second time in as many years against another opponent from the SEC.

The first leg of the College Football Playoff kicks off in Atlanta, GA at Mercedes-Benz Stadium where the No. 4 Oklahoma Sooners find themselves installed double-digit underdogs for the second time in as many years against another opponent from the SEC. This time around it’s against Ed Orgeron’s No. 1 LSU Tigers who took the nation by storm after logging a perfect 13-0 record to make the programs first-ever appearance in the College Football Playoff. While the Sooners have a leg up in the experience department having qualified four of the six years the CFP existed, LSU still checks in as the prohibitive 13.5-point favorite as well as the biggest liability for online sportsbooks of the four teams that qualified for college football’s version of the Final Four. Catch it all unfold live on ESPN at 4 p.m. ET on Saturday, December 28.

Linemakers originally opened this game up with LSU installed 11-point favorites and the total pegged for 76 points. While there’s surprisingly been no line movement to speak of dealing with the O/U, there has been a bevy of movement on the pointspread and it’s all been one-way traffic. Heisman Trophy winner Joe Burrow and company currently check in as decided 13.5-point favorites with 52 percent of the overall bet count backing the SEC champs. However, a whopping 72 percent of the bet count has come in support of Coach O’s kids with a majority being of the public variety. While some sharp money has filtered in on the Tigers, it pales in comparison to the majority that’s taken the points with Boomer Sooner. OU’s failed to win and gone 1-1 ATS the last two times it was installed an underdog, while LSU went 7-5 ATS when favored to date.

It hasn’t mattered who Lincoln Riley has had under center the last three seasons. Alabama cast-off Jalen Hurts replaced the likes of Baker Mayfield and Kyler Murray from the previous two CFP entrants to once again lead the team to the Promised Land. With only a shocking 48-41 defeat to Kansas State in a game they went off the board favored to win by 24-points, the Sooners once again look to have a team in place capable of finally locking down a win in this tournament. For that to occur, Hurts and the offense will have to continue doing their thing, but the defense must become a factor. The stop unit was OU’s downfall last season and Bama wrecked it. It was however much improved in 2019 in ranking No. 25 overall and No. 50 in points allowed. How that translates in defending LSU’s juggernaut attack remains to be seen.

What a difference a change in offensive philosophy made for the 2019 LSU Tigers. For years, the Tigers boasted defenses worthy of leading the program to a national championship. Unfortunately, the offenses left much to be desired. That all changed this season when Orgeron elected to bring in Joe Brady to install pieces of the New Orleans Saints spread-based RPO scheme that Burrow took to immediately. I’d say the end results were pretty good! LSU enters the CFP owners of the nation’s No. 1 overall offense that’s No. 3 in scoring. Backed by a defense that concedes an average of just 21.2 points per game (No. 27), the Tigers were an extremely tough nut to crack for all that stood in their way. Just ask the likes of Alabama, Auburn, Georgia, Florida and Texas! This team looks to be the Real Deal Holyfield worthy of being the chalk heading into the CFP.

Linemakers aren’t giving the Sooners much of a chance to win the College Football Playoff evidenced by their near 14-1 return to be the last team standing. Each of the three other teams all check in at +250 or shorter. The fact that LSU is firmly aware of what Jalen Hurts brings to the table from his playing days at Alabama is one of many reasons why I don’t like the Sooners in this spot. Another is the defense as well as the schedule; it was weak to say the least. While I think Baylor is a solid team, it can’t hold LSU’s jock and it gave Oklahoma all it could ask for and more in both matchups. LSU dominated against all of its upper echelon opponents – save for Auburn – and enters the more battle tested team in my opinion. I have no inclination in any way, shape or form to get in front of this runaway train and will be laying the points in this matchup. Should LSU get out to a slow start and Oklahoma excel, I’d have no reservations investing in LSU again on the readjusted live betting lines.