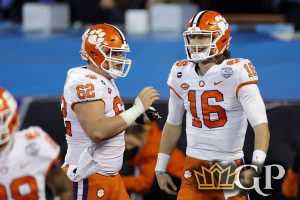 It is time for the bowl games to get good now with huge games on Friday and Saturday, including the College Football Playoff. This is what I’ve targeted with my college bowl game picks through the weekend.

We ended with a 1-2 ATS slate this past weekend, but it could’ve been 3-0 ATS just as easily. The end result pushed us to 35-36 ATS for the season not taking into account moneyline and live bets made during the games. We suffered a brutal pointspread defeat backing Marshall who allowed Buffalo to get ahead of the number with less than 20 seconds remaining in the game. Had the Thundering Herd held the Bulls to a field goal instead of allow the go-ahead touchdown, we would’ve gotten the weekend started off on the right foot. In my breakdown of the game between Western Kentucky and Georgia State, I stated that I really liked the Panthers minus the points but felt the total offered up more line value. I was right in assuming GA State would cruise, but didn’t account for the numerous blunders that cost us our position on the under. Liberty was a wire-to-wire triumph as Malik Willis and the Flames never once allowed Coastal Carolina to get ahead of the closing number. I also recommended firing back on the Chanticleers should Liberty get out to a substantial lead in hopes of cashing in on a middle. That exact scenario played out. If you played your cards right, you were able to cash in on both teams plus the points after Liberty scored the 37-34 outright win in overtime. What a fun game that was! It’s now on to the big boy bowl games and this is what I’ve targeted with my college bowl game picks through the weekend.

It’s a damn shame the CFP didn’t tinker with its format in this COVID-19 stricken season. How much fun would it have been to see the Bearcats, Chanticleers, BYU, Indiana and San Jose State run with the big boys? Regardless, this is a huge matchup for Luke Fickell’s kids who put forth an undefeated regular season campaign by way of holding onto the football and getting the job done offensively with its ground attack spearheaded by QB Desmond Ridder. Most importantly, it played an unforgiving brand of defense in conceding just 16.0 points per game while ranking 13th at forcing turnovers. Georgia has itself a heck of a defense, but the other side of the ball leaves much to be desired. I’m very interested to see if JT Daniels can carry his excellent end of season run up against this defense. With that, the Bearcats should stick close all the way through and have a shot at winning outright.

There’s no doubt in my mind that Alabama advances to the finals of the CFP by handing Notre Dame yet another semifinal defeat. However, I’m also of the belief that this impost is a bit rich. If it’s not, Notre Dame might want to think about dramatically changing things up. They can’t get embarrassed again with the entire nation watching on, right? The last time these power programs locked horns on the gridiron, Nick Saban tossed Kelly’s salad by way of earning the one-sided 42-14 win and cover as 10-point favorites. Bama undoubtedly has three of the best offensive players in the country at its disposal with Mac Jones, Najee Harris and Devonta Smith all in the running for the Heisman. That said, the defense can be scored upon by powerful offenses (Ole Miss, Florida) and ND has the pieces in Ian Book, Kyren Williams, Javon McKinley and Ben Skowronek to at least stick within this inflated number. If not, I’m never backing the Irish in a big game ever again!

Love ‘em or hate ‘em, the Clemson Tigers are once again the best overall team in the nation. It was simply amazing to see how much better the team was in the second go round against Notre Dame with Trevor Lawrence back under center. The coaching staff made their adjustments to dominate winning 34-10 after falling 47-40 in overtime the first time around. I honestly haven’t seen much of Ohio State this season to see if they’re truly good enough to be considered a Final Four entrant. The fact that the Big 10 changed their requirements in-season to get them into the CFP is bothersome to me. No worries, Clemson will remedy the situation! Brent Venables made adjustments in the second half of last year’s CFP semifinal to help fuel the comeback win. With the Buckeyes owners of a lesser team than last year in my opinion and Dabo and company having plenty of film on what Day will likely attempt to do, I don’t foresee the Tigers having as many issues in the rematch.

The Wildcats love to play tough nosed defense and run the pigskin down their opponent’s throats. Kentucky has been kind to its supporters in the bowl season of late rattling off three straight covers and coming out victorious in each of the last two. While the Wolfpack is currently ranked in the Top 25, I still question their overall body of work to attain a 7-3 overall record. The ACC was once again a running joke this season save for Clemson, Notre Dame, North Carolina and Miami. With that, I’m not impressed by their wins over Wake Forest, PITT, Virginia, Duke, FSU, Syracuse and Georgia Tech. They should’ve lost to Liberty at home! Kentucky took on a much tougher schedule and owns a 4-6 record yet still enters this matchup the favored side. That’s extremely telling in my book – lay the short chalk!

I’ll be damned if I’m not taking the points with Lane Kiffin and the Rebels in what could prove to be one of the more entertaining matchups of the bowl season. It’s been a charmed season for Indiana no doubt. However, Tom Allen’s kids will have to go at the Rebs with a much lesser performer under center in Jack Tuttle after Michael Penix Jr. was lost for the season after injuring his knee against Maryland. As rock solid the Hoosiers defense has been this season, it still has issues defending opposing passing attacks and you know full well Matt Corral and Elijah Moore will look to showcase their fantastic chemistry from the outset of this game. With that, the backdoor should be open all game long so long as the Rebels don’t win it outright instead!