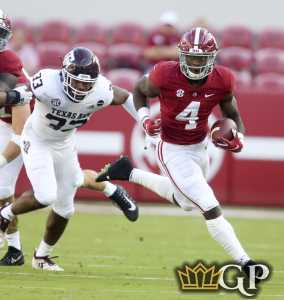 College football is just around the corner and that means college football national championship odds are on the board at top sportsbooks. The Alabama Crimson Tide are the defending champions and begin the season as the favorite to win it all again.

All Other Teams are listed with odds of +5000 or more.

What do you do if you lose your starting quarterback and top receiver? At Alabama you just reload. The Crimson Tide have made the title game in five of the last six seasons and there is no reason to think head coach Nick Saban won’t have his team ready to roll this season.

The Clemson Tigers lost Trevor Lawrence, but the Tigers under Dabbo Swinney are a lot like Alabama in that they just reload. The Tigers have made the title game in four of the last six seasons and won two titles. The Tigers have a new quarterback in D.J. Uiagalelei and he is one of the top contenders to win the Heisman Trophy this season.

The Bulldogs continue to play second fiddle to Alabama in the SEC. The Bulldogs return quarterbacks Stetson Bennett and JT Daniels and the Bulldogs also bring back Zamir White and Nakobe Dean. Is this the year that Georgia finally gets past Alabama and wins a national title?

The Buckeyes couldn’t stop Alabama in last year’s title game and now they have to find a replacement for Justin Fields. It looks like C.J. Stroud will get the job and he has a lot of talent around him. The Buckeyes will be an interesting team to watch in 2021.

The Sooners have the preseason Heisman favorite in quarterback Spencer Rattler so we know they are going to be explosive on offense. The question is how good the defense will be. The Sooners usually find a way to lose at least one game every season that they should win and that usually keeps them out of title discussion.

Don’t laugh, the Iowa State Cyclones could be a national title contender in 2021. Iowa State has never even won a Big 12 Championship in football outright, but they are a serious threat this season. Iowa State returns 19 starters and they have a favorable schedule that has four of their biggest games at home. The one landmine is a late season test at Oklahoma. Iowa State has Brock Purdy at quarterback and he seemingly has been around forever. They have an excellent offensive line and a great tight end. The Cyclones also have one of the best defenses sin the country that returns 12 of their top 15 tacklers. There is a lot to like about Iowa State in 2021 and they could be a live darkhorse title contender.

Two other longshots we’ll take a look at are both in the state of Florida. The Gators return Dameon Pierce and Ventrell Miller and they may not miss quarterback Kyle Trask as much as some people believe. Emory Jones should fill in nicely and the Gators may be underrated heading into the 2021 season.

The Hurricanes could be a title contender if quarterback D’Eriq King returns healthy. It is definitely a question, but we are getting +4000 on a team that could have a superstar at quarterback. The Hurricanes have to deal with Alabama in the opener, but they won’t get downgraded too far even if they lose that game and an upset immediately puts them into the top ten. Keep in mind that Miami doesn’t have to deal with Clemson or Notre Dame in the regular season. Miami has a lot of experience coming back and there is every reason to believe this team will be a challenger to Clemson in the ACC this season.