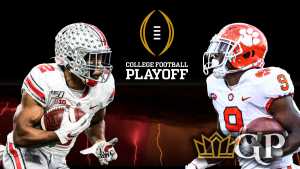 Kicking off the nightcap of Saturday’s College Football Playoff extravaganza will be the No. 3 Clemson Tigers and No. 2 Ohio State Buckeyes, with the Tigers listed as a slight favorite.

Kicking off the nightcap of Saturday’s College Football Playoff extravaganza will be the No. 3 Clemson Tigers and No. 2 Ohio State Buckeyes. Though the defending champs were deemed No. 3 seeds by the selection committee, oddsmakers at online sportsbooks opened them up as short favorites to come out on top of this matchup. Makes sense considering you have to go all the way back to January 1 of 2018 to find the last time the program suffered a defeat. That said, Ryan Day’s troops matchup extremely well against the Tigers and the betting trends dictate as such with the Big 10 champs taking in more of the money in an evenly bet game. If college football bettors knew Justin Fields’ knee was 100 percent, it’s highly likely OSU would currently be short favorites. Take what’s likely to be a heck of a matchup in live on ESPN on Saturday, December 28 at 8 p.m. ET.

This game initially hit the board as a pick ‘em with the total lined at 61.5. There’s been a decent amount of line movement with both the pointspread and total since. The number to beat is up two full points in favor of defending champion Clemson with 51 percent of the bet count in favor of the line move. That said, 55 percent of the handle has come in support of the Buckeyes with a majority of the sharp money being thrown their way. This game marks the first time Ohio State has been dogged this season. The previous seven times linemakers doubted their ability to win a game, they proved them wrong by coming out triumphant each and every time. But that was when Urban Meyer was at the helm, so it’s time to see if his predecessor has the chops to keep the streak going. Clemson was favored in every game this season, and went a bankroll boosting 10-3 ATS. Clemson’s 4-4 SU and 3-5 ATS the eight times it was installed a favorite up to 3-points under Swinney’s watch.

What else can one say about the 2019 Clemson Tigers; or the program as a whole for that matter? We’re talking about a team that’s won 28 straight games and only failed to cover the closing college football odds 10 times during the win streak. That’s freaking insane regardless of the fact that the ACC has been down for a number of seasons now. Though Trevor Lawrence never sniffed the Heisman Trophy this season, he was still the ringleader of a potent Tigers attack that ranked No. 3 overall and No. 4 in scoring. Backed by the nation’s No. 1 ranked scoring defense that allowed just over 10 points per game, the Tigers simply just look to be cut from a different cloth. Even so, Ohio State represents their toughest challenge to date so it will be interesting to see how they stack up with everything on the line.

The Buckeyes were nothing short of dynamos this season. Much like tonight’s opponent, Ohio State made minced meat of all that got in their way. That 48-7 thrashing of Nebraska in Lincoln was quite the eye-opener. So was the 38-7 butt kicking of Wisconsin in the first meeting! Penn State handed them a rare pointspread defeat, but Fields and company still went on to win that game by double-digits against one of the stingier defenses in the country. Then there was the annual curb stomping of Michigan. The offense has an excelled NFL talent in the backfield in the form of J.K. Dobbins, and another impact player on the other side of the ball in Chase Young. It’s a damn shame Fields is working on a gimpy knee because it would’ve been awesome to see how he performed against the stop unit Clemson will bring to the table on Saturday night.

These programs last hooked up against one another in the CFP back in 2016 when the Tigers cruised to the 31-0 win and cover as 1.5-point underdogs. I’d be shocked if the end result played to a one-sided affair this time around as loaded each of these squads are on both sides of the ball. Schedule strength has me leaning ever so slightly towards backing the Buckeyes in this matchup, but I know better. Clemson is the defending champ and it’s won this tournament two of the last three seasons. As much as I respect what Ohio State has done this season, I still have my doubts about the coaching staff being able to take it to the next level with everything on the line. I took note of the Buckeyes slow start in the B1G title game. Clemson hasn’t done anything that leads me to believe their reign is coming to an end anytime soon. This is the experienced heavyweight fighter that simply just knows what to do when all its chips are in the pot. This won’t be a runaway win by any means, but it will be enough to cover the margin and propel the Tigers into the title game a second straight year.