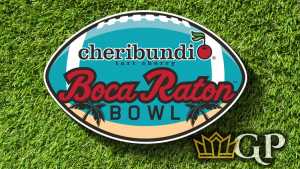 Third up on the bowl game slate for Saturday will be the Boca Raton Bowl matchup between the SMU Mustangs out of the AAC and the Florida Atlantic Owls out of Conference USA.

Third up on the bowl game slate for Saturday will be the Boca Raton Bowl matchup between the SMU Mustangs out of the AAC and the Florida Atlantic Owls out of Conference USA. The Owls once again took care of business in CUSA this season, but Lane Kiffin will no longer be roaming the sideline after bolting for the SEC by taking the vacant position at Ole Miss. With that, it remains to be seen how effective FAU’s powerhouse offense looks without him calling the shots. On the other side of the field stands an SMU team that would’ve had a say in how the AAC shaped up had Memphis and Navy not gone HAM. This is one of the more interesting early bowl pairings set to go down at online sportsbooks. Catch it all unfold live on ABC at 3:30 ET with SMU installed 3.5-point favorites and the total clocking in at 70.5.

The Mustangs initially hit the board as 3-point favorites with the game total lined at 71. Keep in mind, this game takes place on the home field of the FAU Owls. Regardless, SMU has taken a majority of the bets but FAU has taken in slightly more money since the number to beat was originally offered up by linemakers. SMU is currently 3.5-point favorites with the total down a half-point to 70.5. A healthy 65 percent of the bet count resides with the Mustangs, but the Owls have garnered 51 percent of the handle with a majority of it coming from sharp money accounts. Both squads made money for CFB bettors this season with SMU going 7-5 ATS while Florida Atlantic covered nine of its 13 played games. The over has taken in 63 percent of bets, but the under is the money winner with it taking in 73 percent of the action.

The Mustangs were in line to represent the West Division in the CUSA title game after getting out to a perfect 8-0 SU start that saw them cover six of those games against the closing college football odds. Included in the mix were triumphs over Arkansas State, North Texas, TCU, South Florida and Temple. But then Week 10 came around and they dropped a competitive 54-48 decision to the Memphis Tigers in a game they almost covered as 5.5-point dogs even though they trailed by 15 points in the fourth quarter. That defeat was then followed up with another to Navy; this time by a 35-28 non-covering final. Even though SMU has a pair of losses to its names, they came against arguably the best two teams in the conference.

Ever since Kiffin began making Boca Raton his home, the FAU Owls have been the toast of Conference USA. The program has won the title game two of the last three seasons which includes this season after throttling UAB 49-6 in the big game back on December 7. As has been the “MO” of the team since Kiffin took over, FAU’s offense thrived racking up over 500 yards of offense by way of a balanced attack. Though defensive coordinator Glenn Spencer will now be calling the shots, he’s still got some fantastic players to utilize in the forms of QB Chris Robison (3,392 passing yards, 26:6 TD/INT ratio), RB Malcolm Davidson (748 rushing yards, 9 TD) and a bevy of wide receiving talent. Should the defense continue to force turnovers like it did in the regular season, FAU will continue to thrive post-Kiffin.

As impressive a campaign the Owls just put forth by winning 10 of 13 games and winning eight of nine games in conference play to win CUSA for the second time in the last three seasons, SMU will trot the better of the two teams onto the field on Saturday. Sonny Dykes has completely rebuilt the Mustangs program from the ashes, and has his kids back in a bowl game for the first time since getting their teeth kicked in by LA Tech in the Frisco Bowl in his inaugural season overlooking the program back in 2017. SMU’s offense will have no issues exchanging points with FAU should this turn out to be a shootout, so look for Shane Buechele and company to find a way to come out on top and win by margin in the process.