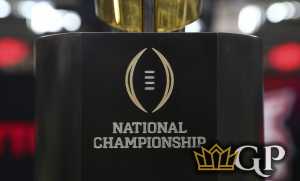 The bowl season as a whole was far from impressive. Thank goodness for the Fiesta, Rose and Sugar Bowls for washing that bad taste out of college football bettors collective mouths! The semifinal rounds of the College Football Playoff were even worse with both the Alabama Crimson Tide and Georgia Bulldogs rolling up and smoking their respective opponents en route to setting up a rematch of the 2018 title game that saw Tua Tagovailoa lead Nick Saban’s squad to the comeback win in overtime after connecting with Devonta Smith for the memorable walk-off touchdown. Though online sportsbooks are hoping for another exciting finish to the CFB betting season, I’m not of the belief it plays out that way; regardless of the Crimson Tide dominating the first throw down in the SEC championship game. There was something very fishy about that first meeting. Very, very fishy! I believe the Georgia outfit CFB bettors banked on during the regular season shows out in the rematch to earn Kirby Smart his very first win against arguably the greatest college football coach in the history of the sport.

The CFP championship game opening betting lines found the Georgia Bulldogs installed 2-point Lucas Oil Stadium favorites with the total clocking in at 51.5. The number to beat is up to -3 with reduced -104 juice currently attached to the Dawgs side of the impost. With the Crimson Tide out to snag back-to-back national titles and already having a win over Kirby’s kids under the belt, the betting market has seen 67 percent of the bets go the way of Alabama. That being said, Georgia has taken in 48 percent of the money with a bulk of it put down at the outset with sharp money accounts hammering the Bulldogs at the opener. Because of it, linemakers have moved the line in UGA’s favor even with it not receiving a bulk of the action. The total is up a half-point to 52 though some 52.5s have started to hit the board. These hated rivals have cruised past the closing total in each of the last four run-ins with an average of 60.5 points denting the scoreboard.

After John Metchie III went down with a season-ending knee injury in the first half of the first showdown, Jameson Williams seemingly came out of nowhere to light up what proved to be one of the best pass defenses in the country. He went on to haul in seven passes that went for 184 yards and a couple scores. He won’t sniff that this time around! The first showing was a fluke, but the market doesn’t suggest as such. His yardage props currently clocks in at an astronomical 112.5 – hit the under confidently! On the flipside, we want as much of Brock Bowers as humanely possible. He just went for five catches and 55 yards for a touchdown against a solid Michigan secondary. Hit his overs across the board - Over 66.5 receiving yards, Over 4.5 receptions – and also take a stab at him scoring the first touchdown (+700) as well as an any-time touchdown (-130).

The Bulldogs have just one blemish on their 2021-22 resume. It head-scratchingly occurred in the SEC title game when it went on to drop a 41-24 decision as 7.5-point favorites regardless of getting out to a 10-0 lead at the outset of the second quarter. For one reason or another, Kirby’s kids had no answers for Bryce Young and the Crimson Tide’s passing attack. Bama’s offensive line also put forth its greatest showing of the entire season. It won’t happen again. Not with Georgia fully aware of what’s in store. The Dawgs had yet to get punched in the face all season. It took them by complete surprise in the first go-round when Bama came out swinging. That won’t be the case this time around. I fully expect another one of those dominant showings that the Dawgs dished out countless times throughout the regular season and expect nothing but all-out dominance which results in UGA winning its third-ever national championship in style!