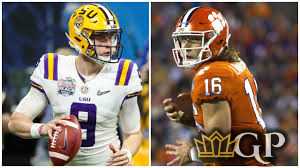 The Clemson Tigers will be out to secure back-to-back College Football Playoff triumphs when they lock horns with the offensive juggernaut that’s proven to be Ed Orgeron’s LSU Tigers in Monday night’s national championship game that will air live on ESPN at 8 p.m. ET. The last time these powerhouse programs matched wits at online sportsbooks, Dabo Swinney’s troops scored the last second 25-24 outright win and cover as 6-point underdogs in the 2012 Chick-fil-A Bowl. Some exceptional talent littered the field in that game like DeAndre Hopkins, Jarvis Landry and Odell Beckham Jr. Could the same type of potential NFL star power be on the gridiron for this one with guys like Trevor Lawrence, Travis Etienne, Joe Burrow, Clyde Edwards-Helaire and Justin Jefferson all in attendance? Either way, the 2019-20 college football betting season is all lined up to go out with a bang with the No. 1 and 3 seeds expected to put on a show!

The betting markets aren’t taking Clemson’s prior success in this tournament into account. Regardless of the fact that the Tigers have won the College Football Playoff two of the five seasons it’s been in existence, the LSU Tigers have received a majority of the action in every way, shape and form. Linemakers initially opened LSU up as 3.5-point favorites, but the number to beat now checks in at -5.5 and at one point hit -6 with 67 percent of the bet count and 79 percent of the handle in favor of the line move. That said, the movement has been predicated upon mostly public money with a majority of the bets made by sharp accounts in favor of taking the points with the Tigers. A bulk of the action on the money line has also come in favor of Clemson with wise guys doing most of the heavy lifting. Very limited action has come in on the total to this point, but the majority of it has come in on the under forcing linemakers to shorten the number to beat to 69.5 after hitting the board a full point higher.

The defending champs were able to silence all their nay-sayers in the first round of the CFP by coming back to defeat an Ohio State Buckeyes team that was without a doubt one of the best teams in the country over the course of the regular season. While the 29-23 win and cover as 2.5-point favorites didn’t see them dominate the way they did against Notre Dame and Alabama last season, the effort was just enough to propel the Tigers back into the title game for the fourth time in the last five years. Still, the Tigers regular season schedule was laughable with the ACC rating out as one of the worst of the Power 5 conferences. Unblemished at 13-0 and looking for more, Dabo’s kids enter the title game having covered each of their last five games and stand a money-making 10-3 ATS for the season. You can’t ignore Clemson’s fantastic record when installed an underdog with the program 6-4 SU and 8-2 ATS the last 10 times.

From the opening week of the season, the LSU Tigers let it be known that it wouldn’t be the same ‘ol song and dance in Baton Rouge. Joe Brady had his fingerprints all over the Tigers 55-3 whitewashing of Georgia State with Burrow going on to throw for 278 yards and 5 TD. That was followed up with another exciting 45-38 win over Texas with Burrow throwing for another 471 yards and 4 TD. Immediately after, Burrow’s odds to win the Heisman Trophy got noticeably shorter. After going on to throw for 4,715 yards and an exceptional 48:6 TD/INT ratio in leading the Tigers to an unblemished 13-0 record, Burrow won the award and followed it up with another sterling performance in the first round of the CFP against Oklahoma who he torched for 493 passing yards and an absurd 7 TD passes. With him under center, Clemson’s defense will be tasked with shutting the nation’s No. 1 offense down; a challenge it will no doubt relish!

I can’t state enough how excited I am to see LSU’s offense match up against Brent Venables defense! If in fact the Tigers from Baton Rouge hit the ground running and score touchdowns in their first handful of drives, I’m going to come away extremely disappointed since I’m all in on Clemson plus the points and will be sprinkling some beer money on the $-line as well. Should the Tigers out of the ACC keep Burrow and company off the board early, that will bode terribly for the Tigers out of Baton Rouge. You got 2-3 drives before Venables figures you out; that’s why the defensive coordinator makes $2 million per season overlooking Dabo’s defense.

Just take a look at the play-in game if you don’t believe me. Ohio State owned the first 24+ minutes of the game getting out to a 16-0 lead. From there, Josh Fields and the Buckeyes offense managed a lone touchdown the rest of the way. As good LSU’s offense is, Clemson will march the best overall unit onto the gridiron in the form of its defense and it has everything to do with the man calling the plays; as well as the athletes on that side of the ball. Should LSU’s Cinderella season continue, so be it; it made for a great story. The betting line for this matchup is a sick twisted joke that has public bettors falling into the book’s trap. Clemson shouldn’t be getting more than a field goal from anyone! It won’t matter in the end though as Clemson’s defense dominates to lead the program to back-to-back titles in a likely low scorer.