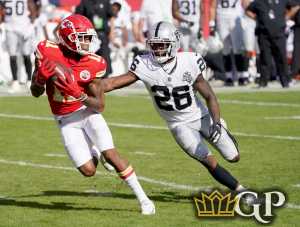 The Kansas City Chiefs visit the Las Vegas Raiders on Sunday Night Football on NBC. The Chiefs lead the AFC West with a record of 8-1, while the Raiders are two games back at 6-3. The Raiders handed the Chiefs their only loss earlier this season, so a win by the Raiders would move them to just one game back and they would hold the tiebreaker edge. The betting public has been taking the Chiefs, as the line has jumped from 6.5 to 8. Let’s look at Sunday Night Football and NFL picks.

The Chiefs will be looking for revenge on Sunday night, as the Raiders beat the Chiefs at Arrowhead earlier this season by a score of 40-32. Kansas City quarterback Patrick Mahomes has rarely lost to an opponent twice in the same season. In fact, it has happened only once, as he lost to the Patriots twice in 2018. "Any time you lose to anyone, the next time you play them you want to win the football game,'' Mahomes said to the media, "We'll be ready to go, I promise you that. ... We don't like losing to teams twice, so we'll have the right mindset.''

The Raiders had not beaten the Chiefs since 2017 before winning earlier this season and it was the first win by the Raiders in Kansas City since 2012.

It is important to know that the Raiders have put a lot of players on the reserve/COVID-19 heading into this game. The total amount of players on the list is 11. Safety Johnathan Abram, defensive tackles Maliek Collins, Johnathan Hankins and Kendal Vickers, defensive end Arden Key, cornerback Isaiah Johnson and practice-squad defensive end David Irving went on the list on Wednesday. "We practiced today and we'll be ready for the game on Sunday," Raiders coach Jon Gruden said to the media. "It's what you have to do. Everybody has to adapt to a lot of things in every phase of life. We had to go through some things before. We'll be there on Sunday and we'll be prepared. We're excited to compete." The Raiders could get most of those players back if they continue to test negative throughout this week.

If the Chiefs can give Mahomes time to throw they will win this game going away. The Kansas City offensive line has injury issues, so it is uncertain whether they can handle the pressure the Raiders will throw at them. One thing that will help Mahomes is the return of Sammy Watkins. He has not played since Week 5. “He’s a threat in every way.” Mahomes said to the media, “The way he’s able to catch the ball in traffic, the way he’s able to catch the ball and have this breakaway speed and still be able to score and be a big body.”

I know that the Raiders have played better than expected this season, but I still have no confidence in Jon Gruden or Derek Carr. The Chiefs are better on both sides of the ball than the Raiders and they are also playing with revenge. This should be a game where the Chiefs send a message and put the Raiders in their place. I will lay the points and take Kansas City.

Check out the latest Week 11 odds at top online sportsbooks.