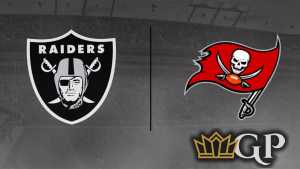 Tom Brady and the Tampa Bay Buccaneers visit the Las Vegas Raiders on Sunday on FOX. Let’s look at the game between the Buccaneers and Raiders and Week 7 Football picks.

Tom Brady and the Tampa Bay Buccaneers visit the Las Vegas Raiders on Sunday on FOX. This game was moved from Sunday Night Football to an afternoon start, as the Raiders have coronavirus concerns. The Bucs lead the NFC South with a record of 4-2, while the Raiders are in second place in the AFC West with a record of 3-2. The betting public has been backing the Bucs in this game, as the line has gone up to Tampa Bay -4, while the total is 53. Let’s look at the game between the Buccaneers and Raiders and Week 7 football picks.

The Bucs and Tom Brady would have been in prime time this week and it would have been three straight weeks on national TV, but this week's game in Las Vegas was moved to an afternoon start because NBC was worried the game might get postponed, as the Raiders have coronavirus issues. Tampa will be at the Jets next Monday and then home against the Saints on Sunday night in three weeks. "It's an honor to be on the national games, and I think our guys are embracing it," head coach Bruce Arians said to the media.

There are some concerns on the Las Vegas side heading into this game, as right tackle Trent Brown tested positive for COVID-19, and Las Vegas head coach Jon Gruden kept out the entire starting offensive line out of practice on Wednesday. "I guess they were around Trent," Gruden said to the media, "I can't get into things any more than that. But hopefully we'll get some players back (Thursday), or for Sunday." The Raiders need all the help they can get on their offensive line, as Tampa Bay’s defense is first in the NFL in total yards allowed per game (282.0) and rushing defense (64.3). Tampa’s defense sacked Green Bay quarterback Aaron Rodgers four times last week.

The Raiders have gotten good play this season from quarterback Derek Carr who has a 73.1% completion rate and a 115.9 passer rating. The Raiders are averaging 30.2 points per game this season. One of the key matchups to watch in this game has Las Vegas tight end Darren Waller going against Tampa Bay cornerback Jamel Dean. Waller has 34 catches this season, double the number of catches for any other player on the Raiders. If the Bucs can’t contain Waller, they could be in trouble on Sunday night.

I split my two picks last week with the Rams and Under, as the Rams didn’t play well but the game did go under. I said last week I was worried about going with the public, but I did it anyway and took the Rams. This week the public is all over the Bucs as a road favorite. That is also the way I would go, but I am not making the same mistake I made a week ago. I am avoiding taking a side in this one and will focus on the total. The Bucs have been very efficient on offense this season, while the Raiders have been explosive. I know the Bucs held down Rodgers last week and that their defense has great numbers overall, but I am not entirely sold. I think the Raiders will be able to move the ball and score points and we know that the Bucs are going to score against a leaky Las Vegas defense. I had the total pegged last week on Sunday night and I’ll look to repeat that success this week and take the game between the Bucs and Raiders to go over the total.