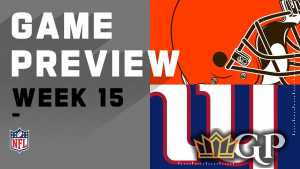 The Cleveland Browns visit the New York Giants on Sunday Night Football on NBC. The Browns come into this game in a huge letdown spot after they lost a heartbreaker on Monday night to Baltimore, while the Giants are coming off a poor effort against the Arizona Cardinals. The question in this game is whether the Giants will have starting quarterback Daniel Jones. He is dealing with a couple of injuries and it could be that Colt McCoy gets the start on Sunday night. Let’s look at Sunday Night Football and NFL picks.

The Browns are likely to end up with a Wild Card playoff spot in the AFC. They are unlikely to catch Pittsburgh for the AFC North title, so it is all about holding onto a Wild Card spot and peaking for the playoffs. The Browns scored plenty of points last week against Baltimore, but their defense couldn’t stop the Ravens. On the other side, the Giants played poorly in a loss to Arizona and now they are one game behind Washington for the lead in the NFC East. New York will have to pick up a game somewhere in the last three weeks if they are to catch Washington and win the division.

The Giants may not have Daniel Jones on Sunday night. He was limited in practice this week and he is nursing a hamstring and ankle injury. Giants head coach Joe Judge said he had not decided whether it will be Jones or Colt McCoy under center.

"If (Jones) can defend himself properly in the pocket as I've said before on how I'll handle it, if he's not at risk beyond any normal game, then we'll go ahead and give him the opportunity to play," Judge said to the media on Wednesday. "If we think that's an issue, that he can't go out there and defend himself, then we'll make the best decision for him long-term and the team as well."

There is no doubt where this game is going to be decided and that is the New York rushing attack going against the Cleveland rush defense. It looks like Colt McCoy is going to start in this game and when he started against Seattle, the game plan was simple; run the ball. The Giants are going to try and pound the ball against the Browns defense and avoid having to win the game with McCoy throwing the ball. Cleveland’s defense didn’t look good last week against the run, so the Giants could have some success running the ball. The question is whether or not McCoy can make a few plays to keep the defense from stacking the line against the run. New York doesn’t have Saquon Barkley, but they do have Wayne Gallman and he is capable of having a good game against Cleveland. The Browns are just 16th in the league against the run, giving up 114 yards per game.

The Browns are the better team, but this is a bad spot for Cleveland as they are in a huge letdown spot. They are also facing a New York team that does play good defense. The Giants are capable of staying in this game thanks to their defense and if they can run the ball effectively they can win this game. I’ll take the Giants plus the points and also play the game under the total.

Check out the latest Week 15 odds at top online sportsbooks.