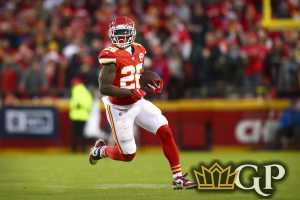 A rematch from Week 10 is set to play out on the gridiron of Arrowhead Stadium in the first of two championship matchups on Sunday when Derrick Henry and the Tennessee Titans collide with Patrick Mahomes and the Kansas City Chiefs.

A rematch from Week 10 is set to play out on the gridiron of Arrowhead Stadium in the first of two championship matchups on Sunday when Derrick Henry and the Tennessee Titans collide with Patrick Mahomes and the Kansas City Chiefs. The Titz battled back to defeat the Chiefs on their own turf in the first go round, but that was before Mahomes and a number of other members on the team rediscovered their groove. Since losing that game, Andy Reid’s troops have rattled off seven straight victories and covered the closing NFL betting odds at online sportsbooks all but once; pushing in the regular season finale against the Chargers. If the Titans are to become only the fifth team in NFL history to win three games on the road before winning the Super Bowl, they will have earned it!

The Chiefs hit the betting board as 7.5-point favorites with the total lined at 52.5. While the number to beat remains -7.5, it dropped to -7 for a brief moment before jumping back up to the original impost. As it stands at the time of this writing, the Chiefs have taken in 55 percent of the bet count as well as 60 percent of the money. While a bulk of the liability has come from sharp money accounts, they’re no longer all in on fading the Titans with Tennessee taking in 38 percent of the total sharp money wagers accepted in early betting. Looks like the Titz are starting to be taken for real as opposed to the one hit wonders most expected them to be going into M&T Bank Stadium last week. As impressive KC has been for NFL bettors of late, Tennessee has almost been equally as good in going 7-2 SU and ATS in its last nine games.

Nobody gave Tennessee much of a punchers chance in the wild-card round at New England. The defending champs took in a bulk of the money both ATS and on the $-line. All the Titans did was go into Gillette Stadium and dominate defensively as well ason the ground en route to securing the 20-13 outright win and cover as 4.5-point underdogs. Up next were the Baltimore Ravens and likely MVP Lamar Jackson. The Titans went off the board as gargantuan 10-point underdogs yet got out to a mindboggling 14-0 lead. Nearly 200 rushing yards from Derrick Henry later, Tennessee punched its ticket to the AFC title game by earning the 28-12 outright win and cover. And they did it even though the Ravens racked up 530 total yards of offense and saw Ryan Tannehill throw for less than 90 yards a second straight time!

If you thought Tennessee’s path to the AFC championship game seemed improbable, the Kansas City Chiefs would like you to hold their beer. Also tabbed decisive favorites in the division round, a shocked Arrowhead Stadium crowd was forced to sit and watch in fear as their team fell behind 24-0 to a Houston Texans team that had already beat them in the same venue back in Week 6. But due to Bill O’Brien being an incredibly poor coach, he left the door wide open for Mahomes and company to take advantage due to a couple bad decisions; and boy did they ever! Kansas City would go on to outscore the Texans 51-7 the rest of the way to tally the 51-31 home win and cover. Mahomes threw for 321 yards and 5 TD with Travis Kelce being the main beneficiary hauling in 10 of 12 targets and turning them into 134 yards and three scores.

For the second straight week, the Chiefs are going to be enormous liabilities for those booking the bets. You’ll be hard-pressed to not find a teaser with Kansas City representing one of the legs come Sunday. That makes absolutely no difference to me! I think Tennessee has a legit shot of seeing this journey all the way through and will be taking the points because of it. I know KC’s offense seemingly had its way with Tennessee’s defense in the first matchup gouging it for 530 total yards of offense, but that unit was just forced to expend a ton of energy to come back and defeat Houston. While not great, Tennessee’s defense is a much different animal than that of the Texans. The Titans are currently playing with a swagger that mustn’t continue being questioned. King Henry was also able to run wild on the Chiefs porous run defense for 188 yards and 2 TD in the first meeting. Should Dean Pees figure a way to get some stops, the Titz shouldn’t get much resistance in shortening the game as much as possible to keep the pigskin out of Mahomes and company’s hands. I won’t call for the outright even though it wouldn’t shock me if the Titans saw it all the way through. Regardless, take the points and look for Tennessee to battle Kansas City to the death!