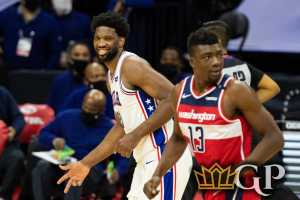 The 76ers were not given any favors by the schedule makers, as they have to come out of the All-Star break and play on Thursday and Friday. They were in Chicago on Thursday and now they have to come back to the Eastern Time Zone and play with no rest in Washington on Friday. The 76ers finally broke a long losing streak at Washington, winning last August, but they had lost the previous nine at the Wizards. The 76ers have also been terrible ATS of late in the second half of back-to-backs, going 0-5 ATS. I think this is a great spot for Washington, so I will take the Wizards as the home dog.

We went with the Wizards earlier in the week but Washington is in a bad spot on Saturday. This will be their third game in four days and they will be playing with no rest, as they host Milwaukee on Saturday. The Bucks have won five of the last six in this series at Washington and they are 4-2 ATS. The Wizards have dropped their last two games playing with no rest and I expect them to get blown out in this one. I will lay the points and take the Bucks on Saturday.

The final play for the week is on the Bulls, as they host the Raptors on Sunday. This is a back-to-back situation for Toronto, as they were in Charlotte on Saturday. The Raptors have done well in this series, but this play is against the Raptors because they have really struggled playing with no rest. Toronto has lost six of their last seven playing with no rest. I will take the Bulls at home in this one on Sunday.

We were on the Spurs on Friday, but we are going against them on Monday night. The Spurs will be playing with no rest on Monday, as they were in Philadelphia on Sunday. San Antonio finally won a game playing with no rest, as they beat the Knicks last week, but they had previously lost their last five in the second half of a back-to-back. I will take the Pistons at home on Monday night.

We normally go against teams playing in the second half of back-to-backs, but there are exceptions to that rule and the Clippers are the poster child for the exception. They have been great playing with no rest, winning their last six. I’ll take the Clippers in this high-profile matchup on Monday night.