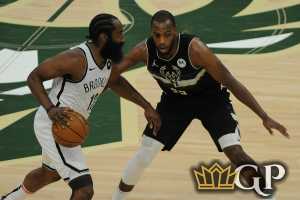 My NBA Best Bets bounced back last week with a 2-1 ATS showing. The showing moves my NBA selections 23-22 ATS overall and the following is what I’ll have going this weekend should all the games be played.

My NBA Best Bets bounced back last week with a 2-1 ATS showing. The Clippers kicked the weekend off with a winner after trimming Utah’s lead in the series to 2-1 after scoring the decisive 132-106 win and cover as 4.5-point favorites. Kawhi Leonard and Paul George each went HAM to reel me in an easy ticket cash. I simply just had to bet the over in Game 4 between the Nets and Bucks mostly due to losing that investment in each of the three prior meetings. I also said that I’d laugh as the teams combined for a fourth straight low scorer. The total closed at 229 at online sportsbooks and only 203 points hit the board. Bwahahahahahahaha! Thankfully, the Suns allowed for a winning weekend after taking the Nuggets out behind the woodshed and serving up a good old fashioned 116-102 beating as 2-point dogs to take a commanding 3-0 lead in the series. They would close it out a game later. The showing moves my NBA selections 23-22 ATS overall and the following is what I’ll have going this weekend should all the games be played.

While it’s great this series has been pushed to a seventh and deciding game, the series overall has come away as quite the disappointment. There hasn’t been a single game to combine for a high scorer per the closing NBA odds, and Brooklyn has been forced to work with less than a full deck from the series opener. James Harden still isn’t 100 percent even though he’s roughed it out the last two games. Still, he hasn’t been himself evidenced by his less than Beard-like outputs. That said, I truly feel the Nets simply just went through the motions to get the series back to the Barclays Center so they can close it out in front of the hometown faithful. I’m not a believer in the Bucks and don’t think they got it in them to win a game like this. If yet to get a piece of Brooklyn winning it all, do it now as their odds of pulling off the feat will get dramatically shorter once they win this game!

Though Friday’s matchup in Tinseltown was yet to play out at the time of this writing, I fully expect to see the Clippers partaking in yet another Game 7 after surviving the Mavericks in the first round. Only this time, Kawhi Leonard isn’t going to be there to save them. As impressive Paul George was in Game 5, I’ve seen that type of scenario play out all too often to believe LA can withstand the Jazz if in fact Utah earns the right to host the seventh and deciding game. All the air will come out of the balloon if the Clippers do in fact fall on their own hardwood on Friday night. As deflated they’ll be entering this win or go home bout, I’ll want absolutely nothing to do with taking the points. The Jazz were the best team in the West all season, and they will advance to the conference finals.

Seriously, how on god’s green earth did the Sixers let the Hawks off the hook in Game 5? That was a rhetorical question. I watched the game and saw how it happened. But still, how the heck did Doc Rivers allow it to occur?! Philly owned a 22-point halftime lead for crying out loud! Regardless, I simply can’t envision the 76ers allowing anything remotely like that repeat itself should it go into Atlanta and score the win that sends this series back to Philly for a seventh and deciding game. Philadelphia has been able to get anything it wants on the offensive end of the floor throughout this series; save for the last 20 or so minutes of Game 5. With that, I’ll go back to the well and back a 76ers team that’s been money in the bank at home all season long (33-9, 25-16-1 ATS).