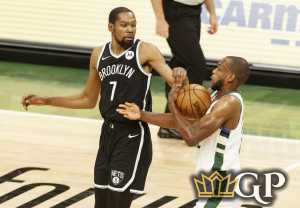 The Eastern Conference Semifinals get underway this weekend, as the Milwaukee Bucks take on the Brooklyn Nets, while the Atlanta Hawks play the Philadelphia 76ers. Let's look at Weekend NBA Playoff Best Bets

It was a terrible showing for my NBA Best Bets which managed just one ticket cash through four tries last weekend. The Atlanta Hawks ended up being the only winner by taking a commanding 3-1 series lead after handing the Knicks a 113-96 defeat as 5-point home favorites. They’d go on to win the series a game later, and we had them in that game as well. Trae Young was just too much for Julius Randle and company to handle. Speaking of being too tough to handle, the Philadelphia 76ers and Utah Jazz made minced meat of us on Saturday after covering the road chalk in both games. Washington never stood a chance getting rung up 132-103 as 5.5-point home dogs, while the Grizz were in it with 3+ minutes remaining but went ice cold and fell by 10 also as 5.5-point dogs. Once Luka Doncic suffered an injury in the second half against the Clippers, my ticket on the Mavs plus the points was cooked. LA would go on to cruise to the 106-81 win and cover to tie the series up. The 1-3 ATS showing moves us to 20-19 ATS heading into this weekend’s action. Hopefully the basketball gods smile upon us and we get to cash some tickets at online sportsbooks this weekend!

Linemakers are expecting a shootout in the opener between the Bucks and Nets with the O/U currently checking in at 240 with even juice on each side of the impost. It’s almost as if the books didn’t do any homework whatsoever and basically threw the average combined score of the three regular season meetings on the board and sat back to see where the action took it. In fairness, the total hit the board at 241 and the betting markets have since bet it down a full point. I’m thinking it was the wrong move. Milwaukee’s 3-point defense is laughable to say the least (No. 29), and it will now be forced to deal with a fully healthy Brooklyn side with shooters galore. On the flipside, Blake Griffin and company won’t be enough to prevent Giannis Antetokounmpo and his cronies from simply doing as they please close to the rack. Milwaukee ate the Nets alive in the paint in the three regular season meetings, and I don’t foresee that changing in the playoffs. This matchup seriously might go down as one of the highest scoring playoff series in NBA history! Look for it to live up to the hype in Game 1 with both teams hanging crooked numbers on the board in a high scoring shootout. Click next to the over and press submit, now!

Many were questioning Trae Young heading into the first playoff series of his career against the Knicks. Would the flaws in his game get in the way of the Hawks being able to move on to the next round? Well, the answer to that question was a resounding no! All Atlanta’s stud point guard did was average just under 30 points, just under 10 assists and 2.8 rebounds per game over the course of the five played games. He also only turned the ball over more than twice in two of the five games. He and his teammates will undoubtedly enter this series with a chip on their collective shoulder after the Sixers took two of the three regular season meetings which included trouncing the Hawks in both of their visits to the Wells Fargo Center. However, Joel Embiid isn’t likely to play in the series opener after suffering a slight meniscus tear in the concluder against the Wizz. His absence should help part the waters for Young and company to get to the rack with relative ease. I’m curious to see who steps up for the Sixers and will be betting against whoever it is not being able to silence the smoking hot Hawks. Hit “Hotlanta” on the $-Line!

I’m writing this selection up with the expectation that LA goes into Big D on Friday night and forces a Game 7. And why would I not with the road team winning each and every one of the games played to this point of the series? Seriously, this matchup between the Mavs and Clippers is maddening and it makes no sense! People are in the stands for these games now, right? I guess neither team is a believer in home court advantage. Regardless, I recommend sticking to the series trend and taking the points on the NBA odds with Dallas in this seventh and deciding game; they should be receiving around 7-points once again. Also throw some beer money on the Mavs winning the game outright and adjust in-game if need be. With it being a Game 7, points will likely be tough to come by as well due to nerves and both teams looking to play it closer to the vest. The under has already cashed three times in this series with an average of 214.4 points scored. The two high scorers only came to fruition due to outrageous shooting performances from Doncic in Game 2 and both Kawhi and Paul George in Game 3. Neither team will shoot at a high clip in this one, so hit that under confidently.