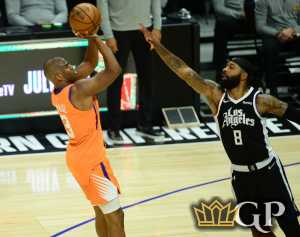 NBA Conference Finals odds are on the board for this weekend's action at top online sportsbooks. I’ve got two Best Bets lined up for the weekend. Hopefully they bring the record back to even – good luck!

After producing a profit my previous time out and feeling great about the end results, my Weekend NBA Best Bets went 0-fer last weekend and it wasn’t even close. It all tipped off with a loss on the Brooklyn Nets on Saturday. Maybe the “Super Team” wasn’t just going through the motions and the Milwaukee Bucks were just the superior team. Still, those injuries to Harden and Kyrie played a major role. On Sunday, I figured the Jazz would be looking to close the Clippers out. Instead, it was Los Angeles that went into SLC and sealed the deal. Hat tip to Paul George and the gang there! The final loss occurred with the Philadelphia 76ers who never once found themselves in a position to cover the home chalk against Trae Young and company. Let’s just say I learned my lesson and recouped a good chunk of the losses backing Atlanta in Game 1 at the Bucks. Young went for a playoff-high 48 points! The 0-3 ATS effort moves us under the breakeven point for the first time all season at 23-25 ATS. I’ve got two Best Bets lined up for the weekend. Hopefully they bring the record back to even – good luck!

Personally, I’m 2-1 ATS betting this series after LA once again defended its court in Game 3 to trim the Suns lead to 2-1. I took the points in Game 1 and lost, but came right back the following game and cashed after the Clippers fell 104-103. Then in Game 3, I took my largest position of the series on the home team and cruised to the comfy outright win and cover. George has been simply brilliant throughout this series. He’s taken his game to a new level with Leonard unable to participate. On top of that, the Clippers have gotten enormous contributions from Reggie Jackson from deep, Patrick Beverley defensively and Ivica Zubac on the glass. And don’t’ forget about Terance Mann, Luke Kennard and Marcus Morris.

Still, it’s telling to me that the Suns are still the decided -500 favorites to win this series and also check in as the short chalk to come out victorious Saturday night. Devin Booker was horrid in Game 3. Cameron Payne sprained his ankle in the 1st quarter and might not be able to suit up for this one. Even so, Phoenix hit the board as the favored side. It’s the better overall team in my opinion with the better coach. LA’s magical run will run out of gas at some point in this series, and I’ll be betting Game 4 like it’s the perfect backdrop for it to occur.

Though the end result of Game 2 is unknown at the time of this writing, I’m figuring Milwaukee found a way to even the series up and take it to Hotlanta tied at a game apiece. The Hawks have fallen flat each of the two prior times it sprung the upset in the series opener of the last two rounds. Back home for Game 3, Nate McMillan’s troops stand 1-1 SU and ATS after beating the Knicks 105-94 as 4.5-point favorites and fell to the 76ers 127-111 as 2-point underdogs. I cashed a nice ticket on the Hawks in the series opener in what proved to be a competitive match right from the opening tip. Both teams got out to near double-digit leads before the Hawks went on to take the opener by a 116-113 final count in a game that got mighty defensive in the fourth quarter.

Bottom line, the Hawks are simply just a bad matchup for Milwaukee. Its defense defends the perimeter well (No. 3), and its offense showed an ability to break the Bucks down routinely slashing to the hoop. While Milwaukee had its way on the interior, Atlanta’s bigs still more than held their own. John Collins and Clint Capela are playing with supreme confidence right now. Young is in a world of his own. The atmosphere in the State Farm Arena will undoubtedly be electric with the Hawks hosting an Eastern Conference Finals game for the first time since LBJ and the Cleveland Cavaliers swept them back in 2016. You can take the points if you like, but you won’t need them after Atlanta wins the game outright to reclaim the series lead.