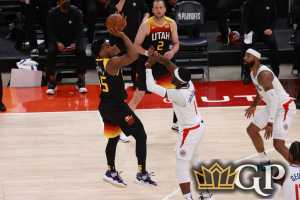 The 1-2 ATS showing last weekend now has my NBA selections 21-21 ATS overall; what a waste of time! Anyway, here’s to hoping I don’t fall under .500 with this weekend’s selections. Fade or follow, the choice is up to you.

My NBA Best Bets struggled once again last weekend with one ticket cash through three tries. The Atlanta Hawks proved to be the only winning wager after Trae Young and company took the series opener against the Philadelphia 76ers outright as expected. Unfortunately, the other two total positions went up in flames. Before the Brooklyn/Milwaukee series tipped off, I was one of the many that felt the series had a chance to become one of the highest scoring in NBA Playoffs history. That wasn’t the case in Game 1, and it hasn’t been the case in the following two games either. Game 7 between the Mavs and Clippers didn’t play out to a low scorer either; much to the chagrin of my bankroll. The 1-2 ATS showing now has my NBA selections 21-21 ATS overall; what a waste of time! Anyway, here’s to hoping I don’t fall under .500 with this weekend’s selections. Fade or follow, the choice is up to you.

Through two games, the Jazz have converted 37 of 89 overall attempted shots from beyond the arc. That’s good for a 41.5 percent success rate and it’s the main reason why Utah invades Tinseltown owners of the 2-0 series lead. And it’s not like LA has been wretched in either of the games either. Kawhi and company converted at a 42 percent clip in Game 1 and followed it up with a 47 percent showing in Game 2. Unfortunately, each effort saw them lose both games by an average of just 4.5 points per game. The opener barely stayed under the closing total, while Game 2 took a free throw and a made 3-ball with only seconds remaining to push it over the top. After taking in both games, it’s clear as day to me that Utah will eventually punch a ticket into the Western Conference Finals. LA simply just doesn’t have the offensive firepower to keep up, and the Jazz’s offense has had no issues picking apart the Clippers No. 6 ranked 3-point defense. However, Los Angeles is going to win one of the next two games. It makes most sense in Game 3 with it just suffering a pair of tough losses after letting both games get away late. Just in case the pointspread comes into play as close the series has been thus far, I recommend hitting Paul George and company on the moneyline. Should LA fall into an early hole, I’d also entertain hitting them on the readjusted live betting point spread and moneyline as well.

I want my money back! More importantly, I want the time I wasted watching quite possibly the worst playoff game ever played when Milwaukee held on to beat the Nets back as well. The total seriously went off the board at 235.5. A grand total of 169 points were scored in Game 3! It went under by 66.5 points dependent upon where you got into the market. So far, this series has grossly failed to live up to its billing. Game 1 combined to go under by 17.5 points. Game 2 by 27.5. These teams are going backwards! At least I knew my wager on the over in Game 3 was over after one quarter of play. I bet Bucks backers thought the same thing with Milwaukee going into the second quarter up 19 points. Not so fast my friend! It’s been a blood bath of epic proportions for my roll thus far as I’ve been on the over in all three games. I’ll be making it four on Sunday afternoon and can’t wait to see how many points it goes under by this time around.

After the Trail Blazers seized control of Game 1 late and went on to cruise to the 123-109 outright win and cover as 1-point underdogs, I didn’t think Denver had a shot of winning the series. I thought Damian Lillard would simply just be too much. The Nuggets surprised me by allowing him to do his thing and shut everyone else down. Unfortunately for them, Phoenix is a completely different animal. Devin Booker is the alpha, but the Suns also boast a couple of fantastic betas in DeAndre Ayton and Chris Paul. While Booker has done his thing, it can be argued that the other two are the main reasons why Phoenix won and covered the first two games of the series. Nikola Jokic hasn’t been able to dominate in the paint because of Ayton, while Paul has done it with both his shooting and ability to get all teammates involved. I suspect Phoenix earns a split through the weekend. I’d prefer it to come up short on Friday night to set up this ideal betting spot. Should that not be the case and Phoenix has a shot to close the series out, I’ll take a roll of the dice and see if they can pull it off. Phoenix is the better of these two teams by a country mile!