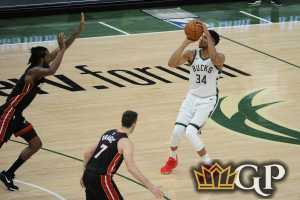 Get ready for NBA Playoff Best Bets. A 2-4 ATS close to the regular season moves our season-long record to 16-14 ATS. Here’s to a much better showing with this weekend’s NBA playoff selections!

My Weekend NBA Best Bets got out to a decent start with the Brooklyn Nets taking care of business against the Chicago Bulls and the Indiana Pacers sticking within an inflated number against the Los Angeles Lakers. Unfortunately, the good times came to a screeching halt soon after as my next four positions each failed to get back to the ticket window at online sportsbooks. The Bucks made quick work of the Heat in what eventually turned out to be a preview of a first round playoff matchup to close Saturday out 2-1 ATS. Then Sunday rolled around and let’s just say it was a day to be forgotten. The Knicks were never in a position to cover against the undermanned Celtics, the Grizz and Warriors failed to play to an expected track meet, and the Kings had no shot of sticking with the Jazz. I did however believe Utah would’ve locked up the No. 1 seed in the West by then, but it needed to defeat Big Sac to do so. A 2-4 ATS close to the regular season moves our season-long record to 16-14 ATS. Here’s to a much better showing with this weekend’s NBA playoff selections!

I’m going right back to the Fiserv Forum for the first selection of the weekend. Only this time, I’ll be reversing course and laying the home chalk with the Bucks. Last week, I figured Milwaukee would have nothing to play for when the teams locked horns. That wasn’t the case as Giannis and company had a shot to jump into the No. 2 seed. They ended up playing with purpose by bolting out to a 44-28 first quarter lead and never looking back. Remember, the Heat bounced Milwaukee from the playoffs in the bubble a season ago. This is a huge revenge spot for the home team, and Jimmy Butler may or may not suit up. Either way, he’ll be playing with a bad back and that’s no bueno for Miami’s chances. Bucks set the series tone with the dub and cover!

Though we’ve lost some line value since the O/U hit the board at 221.5, I’m still in favor of backing the under in the opening game of the series that pits Luka Doncic up against Kawhi Leonard for the second straight year. All three of the regular season meetings between these clubs combined for low scorers with an average of 199.7 points scored. Kristaps Porzingis is only four games removed from his most recent ailment, and I question whether No. 77 will get the offensive production he’ll need from his teammates for the Mavs to hang throughout this series. Anything can happen if Doncic goes off, but I can’t help but think Kawhi Leonard and Paul George will be doing everything they can to limit him in the series opener. Under she goes!

While the Blazers are the betting public’s chic pick to win this series and linemakers also look to be of that same belief installing Damian Lillard and company the favorites, I can’t help but think the soon to be named MVP and his Nuggs teammates will be inhospitable hosts in the series opener. Jokic won’t be quick to relinquish home court advantage that quickly, so I’m expecting a huge series toning effort to be put forth by the home team. Denver should have its way in the paint throughout this series, and that should help lead the team to the 1-0 series lead.

Wednesday night’s play-in proved to be an unbelievable buying opportunity on the Lakers in the in-game betting markets. Down 12 at the break in what played out to be a low scorer, the defending champs were a no-brain buy both on the point spread (+5) and moneyline (+180). While Los Angeles ultimately ended up winning the game on a desperation LBJ 3-ball, it took every ounce of energy to get by the pesky Warriors. Bottom line, the Lakers looked out of shape and out of rhythm and I don’t expect those trends to be rectified in this quick turnaround against a Suns team that went 27-9 SU and 23-13 ATS in the desert. Devin Booker and company will be licking their chops, and I fully expect them to cover the NBA odds in a runaway fashion! Should LA go on to lose the first two games, I highly recommend hitting the champs on the readjusted series lines; they’ll find a way to advance!

New York swept the season rivalry both SU and ATS. Even so, the number to beat is sliding ever so slightly towards Trae Young and the Hawks. Things that make you go hmmm… I love the way Atlanta matches up against the Knicks with both Clint Capela and John Collins ready to make Julius Randle earn every point and rebound he attains down low. Then there’s Young who is arguably one of if not the best distributors of the basketball in the game. He took his game to new heights against the Knicks throughout the regular season (27/12), and I’m expecting more of the same in the opener. While it’ll be nice to see playoff basketball play-out on the MSG hardwood for the first time since 2013, look for the Hawks to send the rowdy crowd back home unhappy after they take the 1-0 series lead.