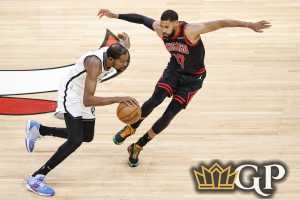 NBA Best Bets have been a success. All in all, we went 4-2 ATS last weekend to increase the overall Best Bet tally to 14-10 ATS since taking over this weekly release. Hopefully we do even better this weekend with the regular season coming to a close.

My Weekend NBA Best Bets got out to a roaring start after the Pacers, Grizzlies and Nets took care of business to propel us into the winning circle on Saturday. The basketball gods didn’t allow for too much celebration as out first investment on Sunday – the under in the Miami/Boston game – got blown out of the water in the first half once 132 points dented the scoreboard. It didn’t get any better in the next spot after the Clippers surprisingly lost at home to the Knicks with both Kawhi Leonard and Paul George suited up. Thankfully, we avoided giving it all up in the night cap after Anthony Davis went HAM to lead the home dogged Lakers to the decided outright win and cover against the NBA odds versus the Suns. All in all, we went 4-2 ATS for the weekend to increase the overall Best Bet tally to 14-10 ATS since taking over this weekly release. Hopefully we do even better this weekend with the regular season coming to a close.

With Philly getting two at home against the G League Orlando Magic to close the year out, the chance of Brooklyn leapfrogging the 76ers for the East’s top overall seed are extremely long. Should Milwaukee log a win at Indiana on Thursday night, they will only sit a single game in back of the Nets for the No. 2 seed. Milwaukee owns the tiebreaker, so if the teams were to finish the season with exact records, they’d overtake the Nets in the Eastern Conference standings. With Harden, Kyrie and KD all finally playing with one another, I just don’t foresee the Bulls being able to keep up regardless of it still having a slim shot of stealing the No. 10 seed away from the slumping Wizz. Lay the home chalk on the NBA with Brooklyn odds confidently!

Indy just scored a huge home upset of the Philadelphia 76ers to guarantee itself a spot in the play-in round come next week. Their sights are now set on securing home court advantage against their play-in opponent. On the flipside, the Lakers now have to accept the fact that they too will also be participating in the play-in round with Dallas likely to close the season out with a pair of wins getting Toronto at home and Minnesota on the road. Anything can happen, but I’m of the belief LA simply just waves the white flag and gets ready for next week. Gimme the Pacers to hold serve!

For all intents and purposes, the Bucks have very little to play for heading into the weekend. They sit 1.5-games in back of the Nets for the No. 2 seed and 3-games in back of the Eastern Conference leading Philadelphia 76ers. Off the pace are the Atlanta Hawks who sit a whopping 8.5-games back. With that, Milwaukee is more or less cemented into the No. 3 seed dependent upon what Brooklyn does over its final two games at home against the Bulls and Cavaliers. On the other hand, Miami is looking to bolster its current seeding and would likely rather matchup with the inexperienced Atlanta Hawks in the first round as opposed to run with the fully locked in Giannis Antetokounmpo and company in a 3-6 matchup. With that, I’ll look for Jimmy Butler and company to be the lone side locked in for this one.

As great a season the Knicks have had, they’ll surely want to close it out in style against a Boston team that looks all but cooked heading into the final weekend of the regular season. The Celtics will have likely cemented their positioning in the play-in round with two games set to go against the Timberwolves before closing it out with the Knicks. Leading up to those games, Boston’s managed just three wins and three covers against the NBA odds in their last 10 games. On top of that, they were trounced 105-75 and won 101-99 in two home bouts against the Knicks this season. This has woodshed beating written all over it, so look for Julius Randle and company to bring their “A” game and close the home schedule out in style!

These teams split their pair of regular season meetings in Memphis where the Dubs scored the 116-103 outright win and cover as 6.5-point dogs in the first meeting, and the Grizz struck back in the second showdown logging the 111-103 win and cover over again as 6.5-point chalk. Both games combined to go under the closing total, but only did so by a total of seven points. With each team looking to lock down its playoff seeding, I’m expecting some fireworks to go off Sunday afternoon leading to an over cash. Look for Steph Curry and Ja Morant to have big showings worthy of each being targets on the player prop odds.

The Kings aren’t playing like a team that’s thrown in the towel regardless of the team bringing up the rear of the Pacific Division standings sitting seven-games under .500 heading into Thursday night’s opener with the Grizzlies. Believe it or not, but Big Sac still has a shot of qualifying for the play-in round needing to win out and have the Spurs continue spitting the bit. If the Jazz takes care of business at Oklahoma City on Friday night, they will have already secured the top overall seed in the West meaning this game will mean absolutely nothing to them. Fingers crossed all scenarios ring true and the Kings are taking to their home hardwood for the season finale with a shot at punching a postseason ticket.