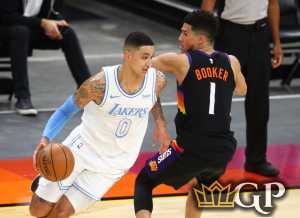 Well we didn’t go 2-4 ATS like we did the week prior, but it was another meh effort for my Weekend NBA Best Bets after compiling a 3-3 ATS overall record. That makes us 10-8 ATS over the last three weeks. Hopefully a standout performance is coming up.

Well we didn’t go 2-4 ATS like we did the week prior, but it was another meh effort for my Weekend NBA Best Bets after compiling a 3-3 ATS overall record. It looked like another bleak showing was ahead after the Memphis Grizzlies kicked things off by losing outright to the G League Orlando Magic as 11.5-point favorites. Thankfully, we closed Saturday’s portion of the 6-pack out with a pair of pointspread wins on the Toronto Raptors at the Jazz and Denver Nuggets at the Clippers. We raised the record to 4-2 ATS early on Sunday when the Milwaukee Bucks held on for the slim win and cover against the Brooklyn Nets, but the Dallas Mavericks and Los Angeles Lakers each failed to win against the Kings and Raptors as decided home favorites. That makes us 10-8 ATS over the last three weeks. Hopefully a standout performance is in the cards this upcoming weekend!

Believe it or not, but the Wizz have catapulted themselves into a potential playoff spot due to their unbelievable run against the NBA odds dating back to April 7. Since then, Russell Westbrook and Bradley Beal have led the team to wins in 13 of their last 17 games. On top of that, they cashed in for NBA bettors 14 times! Indiana finds itself in the playoff picture as well, but the Pacers haven’t been running nearly as hot as tonight’s opponent having gone 1-4 SU and ATS in its last five games. With that, the betting public is going to be all over Washington considering its already won and covered both prior meetings against Domantas Sabonis and company. Fade the noise! Indy’s a plus-money team on the road (19-15 SU & 18-16 ATS) and is also fighting for its playoff lives.

The Grizz have picked the most inopportune time to start playing some of their worst ball of the season. Since sweeping a pair in Portland to dramatically improve upon its shot of going back to the playoffs, Ja Morant and company have gone on to lose four of their last six games both SU and ATS. Though Toronto only stands 1-4 SU in its last five games, it competed mightily against the likes of the Nets, Nuggets, Jazz, Lakers and Clippers during that stretch (3-2 ATS). Regardless, I expect Memphis to actually show up for this one. Should it be catching points, take them and also hit the moneyline!

I hate this spot for the Nuggs with a capital H! Though it likely won’t catch up to the Jazz in the standings sitting 4-games back with only six games remaining on the docket, it doesn’t mean Denver won’t be going all-out to win the season rivalry the night prior in Salt Lake City. Brooklyn was just humbled in a big way in Milwaukee, and I fully expect it to take its frustrations out on all opposition moving forward with it still having an outside shot of leapfrogging the Philadelphia 76ers for the No. 1 seed in the East. Look for KD and Kyrie to go HAM against Denver’s fatigued defense in this one.

Neither the Heat nor Celtics have recently been able to stop opposing offenses from doing as they please. Miami has seen the over cash in each of their last seven games by way of giving up an average of 112+ points per game. Though Boston just held Orlando to 96 points on Wednesday night, it had allowed its previous six opponents to go for an average of 122.6! With that, you can be sure linemakers are ready to hang an inflated total when these Eastern Conference rivals square off in the first of two crucial games with playoff ramifications abound. If that occurs and the number to beat is greater than the 217.5 impost the lone regular season closed at back in early January, I’ll be on the under like white on rice!

The Knickerbockers have been an exceptional turnaround story throughout the 2020-21 NBA betting season in going 37-29 SU and 42-23-1 ATS. However, all of its recent wins have come against teams either not going to the playoffs or those that will with middle of the road seeds. It’s last two meetings against powerhouses saw it drop a 113-97 decision in Denver and a 118-110 decision to Phoenix at home. The Clippers are healthy once again, and because of it will prove to be a real tough obstacle for Julius Randle and company to deal with come Sunday afternoon. Lay the chalk!

Much will be on the line when the Suns and Lakers close this week’s NBA betting slate out from the Staples Center on Sunday night. Phoenix is doing everything in its power to chase down the Utah Jazz for the top seed in the West by winning five of its last six games (4-2 ATS). The Lakers are doing whatever they can with a skeleton crew so as to not be forced to partake in the play-in rounds just to punch a ticket to the playoffs. The Suns are 2-0 SU and ATS in this year’s rivalry, but they’re yet to oppose LA with Anthony Davis on the floor. He should be a go for this one, but it remains to be seen if LBJ suits up after suffering a setback with his high ankle sprain. If he goes – and I think he will – I fully expect the defending champs to let the Suns know who the real boss of the Western Conference truly is.