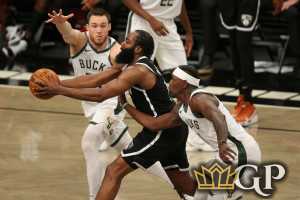 Not a good showing for last weekend’s NBA Best Bet 6-pack with it going a combined 2-4 ATS at online sportsbooks. Saturday kicked off with the Raptors folding in the fourth quarter to allow for the Knicks to keep their win streak intact. It got much worse from there after “The Greek Freak” and his mates skunked the Embiid-less 76ers to sweep the crucial two-game set. Thankfully, Doncic and the Mavs rose up to the occasion and held serve at home against the Lakers. Sunday started off promising after the Hornets upset the Celtics as 8-point underdogs, but then the Suns set in the second half against the Nets and the Warriors were never in a position to cover the heavy chalk against the Kings. Fingers crossed for much better success with this weekend’s 6-pack!

The Grizz are starting to play with fire for a team that currently holds the No. 8 seed in the West with a number of teams hot on their trail. After dropping two straight to the Nuggets on the road and Trail Blazers at home after sweeping a pair in Portland previously, Memphis has been caught in the standings by the division rival Spurs and finds Golden State only sitting a game back. If Ja Morant and his mates aren’t careful, they’ll miss out on the play-in round. With that, I expect all hands to be on deck when they travel to Orlando to close this home and home series out with the G League Magic.

At full strength, the Dinos can play with just about anybody. Unfortunately, the team still isn’t at full strength and it’s shown in their matchups against teams headed towards the playoffs. While the starting five is all present and accounted for, the bench has been thinned out due to injury. Toronto has faltered down the stretch in each of its last two games played against NBA title contenders in New York and Brooklyn because of it. That said, this could be a spot where they compete once again with the Jazz coming off a physically exerting matchup against the Suns the night prior. Gimme the points!

Both the Nuggs and Clippers are suffering from mass injuries right now. Denver will be without Jamal Murray the rest of the season while LA will have to close the regular season out without the services of Kawhi Leonard. On top of that, Paul George has been working on a gimpy ankle as the team dropped two straight against the Pelicans and Suns. Even with the loss of Murray, Denver has continued to roll in winning seven of their last eight games. Denver simply just looks to be in better form right now and it’s taken four of the last five in the recent rivalry. Gimme the road team!

It’s anyone’s guess as to who will and won’t be partaking in this game for the current Eastern Conference. leaders Will it be KD and Kyrie? KD by himself? Kyrie by himself? Who knows! One thing we do know is that James Harden won’t be suiting up. Regardless, I’m expecting Giannis and his mates to rise to the occasion and avenge the tough 125-123 loss absorbed in Brooklyn from back in late January. The Nets needed a huge shooting performance to pull that win out, but I’m expecting the Bucks defense to buckle down and make things much tougher in the rematch.

The Mavs are the current Southwest Division leaders and head into the weekend having won four of their last five games (3-2 ATS). Of its 27 overall losses on the year, two have surprisingly come from the Kings who currently bring up the rear of the Pacific Division with a 25-37 SU record. I’m looking for a heavy dose of revenge to be dished out in this one with that lone loss during their recent win streak coming against Big Sac; along with the 14-point loss at home as 8.5-point favorites a week earlier. Look for Luka to go HAM and prevent the Kings from sweeping the season rivalry.

Since “The Brow” returned to the starting lineup four games ago, the Lakers have just one win and zero pointspread covers. They should get back in the win column on Friday night back home against the Kings, and I believe they’ll be in an excellent spot to get a win streak going Sunday night against the Dinos. This will be the third game played over a four-day stretch for Toronto, while it will only be the second over a three-day stretch for Los Angeles. With that, look for the Raptors thinned out bench to play a major role in the defending champs pulling away late to secure the home win and cover.