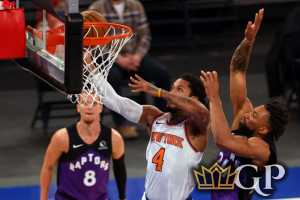 We brought home the bacon with last week’s Weekend NBA Best Bet 6-pack in logging 2-1 ATS showings on both Saturday and Sunday. Let’s go bowling for some more dollars at online sportsbooks with this weekend’s 6-pack!

We brought home the bacon with last week’s Weekend NBA Best Bet 6-pack in logging 2-1 ATS showings on both Saturday and Sunday. The Jazz proved to be the lone loser on Saturday as they shockingly got handled by the Lakers; it’s pretty safe to assume Donovan Mitchell’s unforeseen absence played a role. We bounced back nicely with ticket cashes on the Celtics against the Warriors and Bulls against the Cavaliers. Sunday also started off with a dud after overtime in the New Orleans/New York tilt buried our position on the under. Miami and the Over in the Sacramento/Dallas game allowed for us to absorb that defeat much easier. Let’s go bowling for some more dollars at online sportsbooks with this weekend’s 6-pack!

This one has major letdown written all over it for the Knicks. I’m fully aware that Julius Randle and his mates are smoking hot, but all good things normally come to an end. This is as good a spot as any for New York to struggle against a Raptors team it might not get up for knowing full well Toronto is well out of the playoff picture. That said, the Dinos had come out on top in each of the prior four visits to MSG before incurring a 102-96 defeat back on April 11. Toronto is healthy again and just won and covered a fourth straight against Brooklyn. NY will have its hands full!

I’m selling what the Bucks are offering these days. There’s just something about this year’s edition that leads me to believe the franchise’s window of opportunity is about to slam shut. This will be the second of two very important matchups that will help shape the overall seeding for the upcoming playoffs. Milwaukee logged a 109-105 win and non-cover in Philly back on March 17 in the team’s lone run-in of the season. Joel Embiid wasn’t suited up for that one. He will be this time around and the possible MVP Award winner will lead the Sixers to the win!

Anthony Davis is back in the Lakers rotation; thankfully. That said, I still expect the defending champs to have their hands full with a Mavericks team that sorely needs to sweep this two-game set in order to be taken seriously moving forward. I get that LA has owned this rivalry. Owned might not even be the right adjective to describe the dominance considering they’ve come out on top in nine of the last 10 meetings and covered the closing NBA odds all but two times. Even so, I’m investing in Luka rising to the occasion and helping his teammates defend their court.

No team in the league has been hotter than the Celtics heading into Thursday’s home bout with the Suns. On the flipside, Charlotte has been one of the better fades in the game with a number of its key cogs currently riding the pine due to injury. Regardless, I truly believe the Hornets will be a rabid dog that will have an excellent opportunity of not only covering but winning outright. This will be a tough game for a Celtics team coming off tough matchups against Phoenix and Brooklyn to get up for. On top of that, Charlotte’s been money catching points at home (10-5-1 ATS).

The Suns have done nothing but compete on their current Eastern Conference road swing winning in overtime at Milwaukee (128-127) and following it up with an even more impressive 116-113 win in Philadelphia where the 76ers had only lost six games heading into it. I’m expecting more of the same in this run-in against Kyrie Irving and his Nets teammates. Added motivation should come from the fact that James Harden led the Nets to a surprising 128-124 outright win as 8-point underdogs in the team’s lone clash in the desert back on February 16. “The Beard” won’t partake in this one and it’s anyone’s guess as to whether Kevin Durant will be made available. It won’t matter either way as Devin Booker goes HAM to help Phoenix even up the series.

What is it with the Kings always being forced to play in the late game every Sunday night? They went into Dallas and impressed last week, but I don’t foresee that being the case this time around at Golden State where the Warriors are currently in the midst of a last ditch effort to qualify for the postseason. Steph Curry is currently playing out of his mind as he surpasses his scoring and PRA props on a gamely basis. He should be in line for another impressive stat line in this one against a Sacramento defense ranked dead last in efficiency. The Dubs rolled Big Sac by 30+ points at home back on January 4. Let’s call this one by 20+!