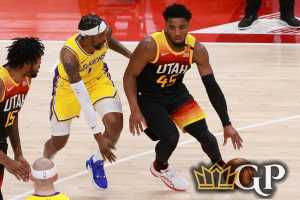 We split our weekend six-pack last week going 2-1 ATS on Saturday and 1-2 ATS on Sunday. After juicing out, it’s time to put this weekend’s slate under the microscope and see if we can’t predict some winners! Let's look at weekend NBA best bets.

We split our weekend six-pack last week going 2-1 ATS on Saturday and 1-2 ATS on Sunday. The Jazz and Trail Blazers hooked us up while the Suns overcame a tough scheduling spot to hand us our only loss. Sunday started off with a bang after Trae Young and the Hawks logged a big outright win at Charlotte, but the Nuggets and Grizzlies failed to come through on their home hardwood against the Celtics and Pacers respectively. After juicing out, it’s time to put this weekend’s slate under the microscope and see if we can’t predict some winners!

While the Lakers continue to tread water with both Anthony Davis and LeBron James out of the equation, the Jazz continue to do their thing looking to lock down the No. 1 overall seed in the West. Utah already owns a 114-89 beat down of the Lake Show from back on February 24, and that game had LBJ on the hardwood while this one will not. Making matters worse for the defending champs is that a number of its current starters are also battling nagging injuries. That’s not good when running up against a healthier opponent that ranks amongst the best in the league at both ends of the court.

The Celtics currently find themselves in one heck of a groove! It heads into Thursday’s showdown with the Lakers in Tinseltown winners of four straight and six of its last seven to cement its positioning within the Eastern Conference playoff chase. It doesn’t look like they’ll have to play into the second season any longer. Golden State on the other hand has fallen out of the Western Conference playoff picture. Injuries have simply just taken their toll. Look for Boston to own the glass and log the win. So long as Steph doesn’t go HAM, they’ll cover the number as well.

Enough is enough already! Chicago was praised for the moves upper management made at the trade deadline. Unfortunately, the team has gone into a major funk since losing four in a row and failing to cover the closing NBA odds in each instance. Though it will be forced to run up against the Cavs on no rest after running with Ja Morant and the Grizzlies the night prior, I can’t help but think Zach LaVine and company will be way up for this matchup after recently dropping a 103-94 decision at Cleveland as 7.5-point favorites back on March 24. This has woodshed beating written all over it!

NBA fans must be salivating over the prospect of watching Zion Williamson and Julius Randle go at one another in the paint once again. These squads just hooked up on Wednesday night in New Orleans where the Knicks scored the 116-106 outright win and cover as 2-point dogs. Zion went for 25-8-7 while Randle went for a game-high 32 points and pulled down eight boards. The matchup looked well on its way towards cashing an easy under ticket, but then the teams exploded for 77 points in the third quarter. Even so, the combined score still barely went over the 219-point closing total. Regardless of whether linemakers inflate the number to beat in the rematch or not, I’ll be hitting the under without hesitation.

I cashed in with the Nets at Philadelphia earlier in the week as near 10-point underdogs regardless of the fact that neither James Harden nor Kevin Durant were in the starting lineup. “The Beard” won’t be suiting up for this tilt in South Beach, but your guess is as good as mine as to whether KD decides to give it a go. Regardless, I think the Heat go all out to win this game and grant their supporter’s a pointspread cover in the process. Remember, this is the team that represented the East in the Finals last season yet it’s getting absolutely no love from the betting markets – or linemakers for that matter – of being a player this time around. Look for Jimmy Buckets and company to play with a major chip on their shoulder because of it!

The Mavs just took a 2.5-game lead atop the Southwest Division standings due to Luka Doncic’s late-game heroics against the Grizzlies. Save for a tough home tilt against New York on Friday night, it gets the benefit of running up against a number of losing teams in the near future which should help bolster its playoff positioning. That includes Sacramento which it will square off against three times over the next few weeks. That said, Big Sac will own the rest advantage for this game having had 48 hours to get themselves ready to go. That leads me to believe Buddy Hield and De’Aaron Fox will be up to the challenge of exchanging baskets with the Mavs all game long. Though Dallas has been a hit for under bettors this season, I expect points to hit the board come Sunday night.