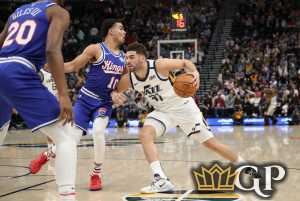 A loaded NBA betting slate is set to go down this weekend with seven games locked in for Saturday headlined by the matchup between the Los Angeles Lakers and Brooklyn Nets on ABC, while 10 games are set to tip on Sunday. Let's look at NBA best bets.

A loaded NBA betting slate is set to go down this weekend with seven games locked in for Saturday, April 10 headlined by the matchup between the Los Angeles Lakers and Brooklyn Nets on ABC, while 10 games are set to tip on Sunday., April 11. Unfortunately, the matchups aren’t very enticing overall. That said, there’ll still be plenty of opportunities to fatten up the bankroll at online sportsbooks, so let’s dig into some of the matchups and see if we can do just that. The following is what I’ll be looking to back on Saturday and Sunday provided linemakers make it worth the while.

This will be the quintessential “get well” spot for the Jazz who will host the Kings three games removed from running up against the Dallas Mavericks, Phoenix Suns (road) and Portland Trail Blazers. After battling those playoff bound teams in a matter of four days and having a full 24 hours rest to get their bodies and minds right to close out this extended five-game homestand, I’m expecting Donovan Mitchell and company to be up to the task of covering what’s likely to be an inflated number against a Sacramento team its flat-out owned in the comforts of Vivint Arena. Utah has won and covered each of the last three times it hosted this rivalry taking Big Sac down by an average of 25 points per game. Lay the chalk!

Losers of four in a row and possibly six if its drops its next two road tilts against the Orlando Magic and Golden State Warriors, the books will undoubtedly be preparing for an influx of Suns money when Phoenix hosts the Wizz on Saturday night. This however is the epitome of a letdown spot for Devin Booker and his mates who will have just wrapped up a two-game set against Western Conference powerhouse Utah Jazz and Los Angeles Clippers in its prior two games. As great the Suns have been at protecting their own house in going 18-8 SU and 17-9 ATS, they’re going to be asked to cover an inflated number against a Washington team that’s struggled mightily since Bradley Beal succumbed to injury. Regardless, gimme the ugly dog!

These teams most recently matched wits against one another in Motown where the Blazers handed the Pistons an ugly 124-101 defeat as 7.5-point road chalk. Portland currently owns the No. 6 seed in the West, but finds the Dallas Mavericks nipping at their heels. In order to avoid being forced to play itself into the postseason, the Blazers must take advantage of these “gimme” bouts against inferior opposition. Detroit is exactly just that with it the owner of the worst record in the Eastern Conference. With a much tougher matchup scheduled the following night against Miami, I’m banking on “Dame Time” getting us to the window.

The enormity of this matchup can’t go without mention. Both the Hawks and Hornets find themselves firmly entrenched within the Eastern Conference playoff picture. As it stands, Atlanta currently owns the No. 4 seed while Charlotte clocks in at No. 6. However, they’re each only a single game up on the Celtics and Knicks. A bad stretch could find each being forced to play its way into the postseason. Charlotte already won the season series after taking both prior matchups. With that, it’s high time Trae Young and the Hawks rose to the occasion and showed the NBA betting community it’s more than just a team currently on a heater. I’m expecting a max effort to be put forth by Atlanta in this one!

The Celtics most recently logged wins in four of their last six matchups, but Brad Stevens’s squad continues to be a major disappointment. Though Boston managed to split in Milwaukee and take down the Thunder in OKC in its three most recent road games, Jayson Tatum and company continue to be an all-out joke when playing away from the Garden. For the season, the Celtics check in a bankroll bursting 10-16 SU and ATS when in the visitor’s role. On top of that, they’re just 3-7 ATS the last 10 times they caught points away from their hardwood. Denver entered the week winners of five straight (4-1 ATS) and went 3-0 SU and 2-1 ATS in its three most recent home tilts covering both matchups against the 76ers and Hawks. Look for Boston’s road woes to continue.

With a gimpy Domantas Sabonis and Malcolm Brogdon in tow, I don’t like this matchup for the Pacers against a Grizzlies outfit fighting tooth and nail to land one of the last playoff spots in the Western Conference. While the scheduling spot leaves cause for concern after just running up against the Sixers, Heat, Hawks and Knicks on the road, Ja Morant and his mates will have had a full 24 hours rest to prepare. Memphis has been dominant at home against the Eastern Conference recently in going 5-1 SU and a perfect 6-0 ATS the last six matchups with the lone defeat coming by 1-point to the Bucks as 6-point dogs. Look for the Grizz to add to that perfection once the clock reads double zeroes.