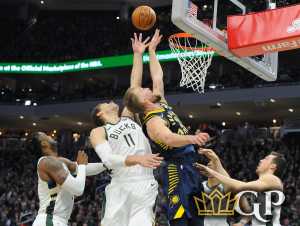 The Indiana Pacers visit the Milwaukee Bucks in the first ESPN game on Wednesday night, while the New Orleans Pelicans are in Dallas to visit the Mavericks in the late game. Check out the latest Wednesday Night ESPN NBA picks.

The Indiana Pacers visit the Milwaukee Bucks in the first ESPN game on Wednesday night, while the New Orleans Pelicans are in Dallas to visit the Mavericks in the late game. The Pacers Grizzlies are in 6th place in the Eastern Conference, but just two games out of 4th place, while the Bucks lead the conference and have the best record in the league.  The Pelicans are 2.5 games behind Memphis for the last playoff spot in the Western Conference, while the Mavericks are in 7th place. Let’s look at both games and Wednesday night ESPN NBA picks.

The Pacers are trying to climb the Eastern Conference standings, as they are just a game out of fifth place and just two games behind Miami for fourth place. It won’t be easy for Indiana on Wednesday, as they visit the Milwaukee Bucks. The Bucks have the best record in the league and reigning MVP Giannis Antetokounmpo. The Bucks have done everything in the regular season, but all that really matters is the playoffs. Milwaukee has a 12.8 point differential per 100 possessions and that is the best in NBA history. The Bucks are leading the league in scoring at 120 points per game and giving up 107 per contest, 7th in the league.

Milwaukee’s star player said that he doesn’t mind the pressure of having the top seed and the league’s best record. "I like it," Antetokounmpo said to the media, "We just come out here and do our jobs. We know the game plan. We know each other better. We know the spots on the floor. We know how to attack. If people come out and say, ‘They're going to win the championship,' maybe we feel more pressure.’ “But nobody thinks we can do it."

This is a really bad scheduling spot for the Bucks. This is the third game in four days. They were at the Hornets on Sunday, at Miami on Tuesday and off on Wednesday. They get this one home game against the Pacers and then head out on the road for a three-game west coast trip. The Pacers were at t he Spurs on Monday and off on Tuesday.

The teams have split their last ten meetings, with 8 of the 10 going under the total. The Bucks have won 7 of the last 10 at home in this one, with six of the last ten going under.

The Bucks are a great team, but this a rotten scheduling spot playing just one home game in between road trips. I will take the points with the Pacers in this one.

The Pelicans have been rolling with Zion Williamson in the lineup and with Lonzo Ball running the offense. Ball is averaging 12.6 points, 7 rebounds, 7.5 assists and 1.5 steals per game in the last 30 plus games.  “I have options in every situation,” Ball said to the media, “Half court. Fast break. Post ups. A lot of different guys can do a lot of different things.”

The Pelicans have Zion, Brandon Ingram and Jrue Holiday, so Ball just needs to distribute the ball. “I think playing in a system like we’ve got is going to enhance his game and give him an opportunity to be who he is,” head coach Alvin Gentry said about Ball to the media, “Yeah, he has some turnovers in those situations. But he has some great plays. It’s something we have to live with.”

The Pelicans are in the second half of a back-to-back, as they were home against Minnesota on Tuesday night. The Mavericks are coming home after a four-game road trip, but they did have Tuesday off.

I am always leery about taking a home team in their first game back after a road trip and the Pelicans have been rolling. I will take the points with New Orleans in this one.