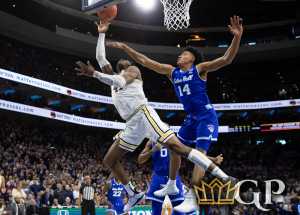 My Wednesday night college basketball picks got back in the win column last week with a 2-1 ATS showing versus the linemakers. Let's look at the Wednesday Night College Basketball Picks, including the Villanova Wildcats vs. the Seton Hall Pirates.

My Wednesday night college basketball picks got back in the win column last week with a 2-1 ATS showing versus the linemakers. The Florida Gators got the night off on the right foot by taking it to the LSU Tigers right from the outset to offer up one of the easier ticket cashes I’ve had in weeks. As fun that game was, the one between the Maryland Terrapins and Minnesota Golden Gophers wasn’t; until the late stages of the second half when the Terps went on an 11-1 run to close the game and win it at the death. The only snafu of the evening occurred with the Boise State Broncos who couldn’t take advantage of UNLV’s prime hangover spot after handing San Diego State its first loss of the season last game out. With this being the final Hump Day picks piece of the regular season, I fully expect to go out with a bang - thanks for reading and let’s make that paper!

A pair of scorching hot teams are set to engage in hardwood warfare when the X-Men and Friars close their regular season rivalry out on Wednesday night. I backed the Musketeers minus the 4-points when these teams hooked up back on February 8 in the Cintas Center. To be honest, I was shocked I actually ended up cashing the ticket as closely contested the game was throughout. The Friars took a 30-28 lead with them into the break, and it was nip and tuck all the way throughout the second half with neither team leading by more than six points over the game’s entirety. It all came down to Providence missing shots in the game’s closing moments and Xavier taking advantage at the charity stripe. Providence was putrid from deep and shot eight less free throws. With the comforts of the Dunkin Donuts Center to fall back on paired with some likely home cooking from the refs, I expect the Friars to even the series up and take a step closer towards sewing up a bye in the Big East Tourney.

The Tigers find themselves back on the hardwood for a Wednesday night tilt, and I’ll have a position in their matchup once again. LSU possesses one of the most efficient offenses in the country due to its excelled guard play with Skylar Mays and Ja’vonte Smart two of the best scorers and ball distributors in the SEC as well as the country. The Hogs also got themselves some PTPers in Isaiah Joe (16.9 PPG) and Mason Jones (21.3 PPG) who also love to fly up and down the court evidenced by the team’s No. 55 ranking in adjusted tempo per the current Pomeroy Ratings. These teams already played to a 79-77 final won by LSU and covered by Arkansas in a game that combined to go over the closing total. I’m expecting more of the same in the rematch; only this time it wouldn’t shock me in the least if one of these teams hit the century mark! These conference rivals have cashed over tickets in four straight skirmishes with an average of 174.3 points denting the scoreboard. This has all the makings of a track meet – Slam the over!

I’ve been touting The Hall since December and already have shares of them winning the national championship in my portfolio. Do you really think I’m going to let the chance of backing them versus Nova escape me with a shot at taking a step closer towards locking up the Big East regular season title? That was a rhetorical question guys and gals! Of course I’m laying the short home chalk! I’m addicted to fading Jay Wright and the Villanova Wildcats. I don’t like money ;). All kidding aside, the Pirates are the better and more experienced of the two teams that already handled the Wildcats once this season in the Wells Fargo Center where they logged the 70-64 outright win and cover a 4-point underdogs. Had The Hall not turned the ball over a sickening 14 times, they would’ve won the game going away instead of needing to comeback in the second half to score the victory. Even with Nova off a loss last time out, it won’t faze me. Seton Hall is the better of the two teams and they’ll show as such in this get-well spot that sews up the Big East title.