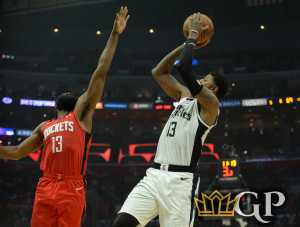 Thursday night’s NBA schedule on TNT this week features a big battle in the Western Conference, as the Los Angeles Clippers visit the Houston Rockets. The late game has the Toronto Raptors traveling to face the Golden State Warriors.

Thursday night’s NBA schedule on TNT this week features a big battle in the Western Conference, as the Los Angeles Clippers visit the Houston Rockets. The late game has the Toronto Raptors traveling to face the Golden State Warriors. The Clippers and Rockets are battling for second place in the West, and each is considered a contender to the Lakers. The late game looks to be a mismatch, as the Raptors have the second-best record in the East, while the Warriors have the worst record in the West. Let’s look at both games and Thursday night TNT NBA picks.

The Clippers and Rockets are in a fight for second place along with the Denver Nuggets. The Clippers are thought of as a team that can challenge the Lakers, but the Rockets could also be getting into that category. Houston has gone to small ball and it is working. Head coach Mike D’Antoni said that teams can no longer double team James Harden on a regular basis. "I think in certain situations, what we're seeing now is he gets doubled sometimes in the pick-and-roll," D'Antoni said to the media, "End of clock, they might double him. But I think the random, as-soon-as-he-crosses-half-court double, is gone."

The Clippers are coming off a game at the Thunder on Tuesday. The Rockets were in New York on Monday and then had Tuesday and Wednesday off.

These teams have split their last ten meetings, with five of the last six going over the total. The Rockets have won 7 of the last 10 at home in this series, with six of the ten going over.

The Rockets look like a team that can really challenge for an NBA title and this is a statement game on Thursday night. I will take Houston in this contest.

The Raptors have not played that well of late and it looks like injuries are finally catching up to them. Their lead over Boston for second place in the East is pretty much gone. The Raptors were without Marc Gasol, Serge Ibaka and Fred VanVleet on Sunday and they were blown out in Denver. Another problem for Toronto lately is that Pascal Siakim isn’t playing well. He is shooting just over 36% from the field in the last three games. Toronto is coming off a game in Phoenix on Tuesday. Golden State is coming off a game in Denver on Tuesday.

As I say when handicapping Golden State games, you have to throw out most of the previous stats because this year’s Golden State team is a mess. Next season when the team is healthy and has Stephen Curry and Klay Thompson then previous trends will be important again.

The Warriors are a bad team going nowhere this season and even at home, they are tough to take. Toronto simply can’t afford to be losing a game against an inferior team, so I will lay the points and take the Raptors in this one.