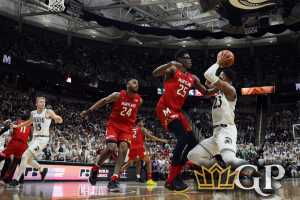 Take your money. Walk away from the table. Remember this night. My Saturday night college basketball picks actually swept the board last week! If you’ve been following this piece all season, you know winning days have been few and far between with these gargantuan Saturday cards. But that wasn’t the case this time around; I can’t even begin to tell you how weird it felt to have actually made money on a Saturday since the college football season. The Dookies got the night started off on the right foot at online sportsbooks by blowing the Hokies out. Then Alabama and Ole Miss dented the scoreboard as expected to cash an easy over ticket. The winning trifecta piece came in late night when the BYU Cougars skunked the Zags to hand Few’s squad its first WCC loss of the season. Hopefully the effort was a sign of things to come with March upon us!

When these teams met in East Lansing a few weeks back, Maryland was able to escape the Izzone with a dub due to Anthony Cowan Jr. catching fire late from beyond the arc. If he hadn’t scored the Terps final 11 points of the game, Maryland would’ve allowed Sparty to battle back from a double-digit first half deficit and log the win and likely pointspread cover. Though MSU was just severely challenged by Iowa on its home floor last time out, the Terps likely won a game they shouldn’t have in the Twin Cities by outscoring the Golden Gophers 11-1 in the closing moments to score the improbable 74-73 win and cover/push. You can’t help but think a bit of a letdown is in store for this matchup. That paired with Sparty seeking same season revenge has me eager to take the points and get a small taste of the $-Line as well.

It was bound to happen. There likely was truly no way the Aztecs would go through the regular season unscathed while at the same time routinely covering pointspreads. The fun all came to an end last Saturday when SDST went down in defeat to what’s proving to be a UNLV squad catching fire at the tail end of the season. That outright defeat as decided favorites was then followed up with an ugly showing at home against Colorado State whom they beat but grossly failed to cover the 13-point impost against. After just failing to cover the closing 13.5-point spread against the Wolf Pack in the middle of January, you can be sure the betting public will continue to look to fade the Aztecs after they trailed at home by a bucket at halftime in the first showdown - Not me! Malachi Flynn just had a wretched game against the Rams and I expect him to go HAM in this one!

I backed the Sun Devils on the road at UCLA and faded the Trojans at home against Arizona on Thursday night. I’m going to reverse course and fade Bobby Hurley’s kids even though they’ve really impressed me since the calendar turned to February. They’re 7-0 SU and 4-3 ATS with notable wins coming against the Bruins, Trojans, Cardinal, Ducks and Beavers. That said, each of their last five wins have come by an average of less than 3.0 points per game. As much as I like to pick on USC, it has some major talent at its disposal. Onyeka Okongwu is only going to grow into a beast following his freshman campaign, and I believe he’ll be out for some retribution after being held in check with just 5 points, 6 rebounds and 4 blocks in the first battle with the Sun Devils. USC actually shot better from both the field and 3-point line in that game, but 24 turnovers and a poor showing from the stripe (10/17) allowed ASU to pull out the 66-64 non-covering triumph. Now in the comforts of their own gym and logging pointspread covers in five of six before the catastrophe at Utah with Zona pending, I’m backing the Trojans in the rematch.


Facebook
Twitter
E-Mail
We provide the most accurate and reliable sports betting information all in one spot. Whether you are looking for a place to bet or just need the news to help you decide your next pick, Gamblers Palace will point you in the right direction with daily sports news, player status and updates as well as sportsbook ratings and recommendations.