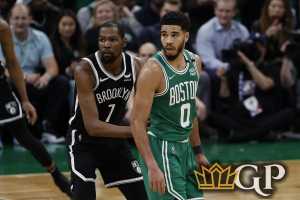 The NBA playoffs are in full swing and now the first round series are at a critical point this weekend. There are four games on Saturday, April 23 and four more on Sunday, April 24. Let’s look at this weekend’s NBA picks.

The NBA playoffs are in full swing and now the first round series are at a critical point this weekend. There are four games on Saturday, April 23 and four more on Sunday, April 24. TNT and ESPN will split the television coverage for Saturday, while TNT and ABC split the games on Sunday. The big game on Saturday has the Boston Celtics visiting the Brooklyn Nets in Game 3 of their series with Brooklyn facing a virtual must-win situation, down two games to none. The premier matchup on Sunday has the Golden State Warriors at the Denver Nuggets in a game that Denver needs to win. It was a slight losing weekend last week, as we went 2-3. Let’s look at this weekend’s NBA picks.

The Celtics visiting the Nets on Saturday on ESPN is where many people will have their focus. The Celtics were fortunate to win Game 1 but they took care of business in Game 2 and now Brooklyn has their backs against the wall. The big problem for the Nets is that Kevin Durant has been awful so far in this series. The Nets are getting strong play from Kyrie Irving but they need Durant to start playing like a superstar or this series is over. If there was ever a time for Durant to get it going it would be on Saturday. The Nets have had some good history against the Celtics in Brooklyn, winning 8 of the last 10 games and going 8-2 ATS. This is a must-win for the Nets and I expect them to get the job done so I will lay the points and take Brooklyn in Game 3.

The Grizzlies visit the Timberwolves in Game 4 of their series on Sunday and Memphis will be looking to take control of the series. The Grizzlies were shocked in Game 1 at home by Minnesota but then they routed the Timberwolves in Game 2. Memphis is definitely the better team in this series and winning at Minnesota is not a big problem for them, as they have taken 6 of the last 10 at Minnesota. I’ll take Memphis in Game 4.

What happened to the Bucks in Game 2 of their series at home against Chicago? It was thought by many, myself included, that the Bucks would roll over the Bulls. That has not been the case, as Chicago has been very competitive. The Bulls may have gotten a win in Milwaukee, but that may be all they can do, as Chicago has been awful at home in recent seasons against the Bucks. The Bucks had won 9 of the last 10 in Chicago before this series began and they also covered the spread going 9-1 ATS. I expect the Bucks to take control of this series and win Game 4.

One team that has looked really good so far in the playoffs is Miami. The Heat rolled over the Hawks in Miami in the first two games of this series. The question is whether or not Atlanta can do anything to make this series competitive. The Hawks definitely need Trae Young to heat up and start carrying them. Atlanta has had some success in the past at home against the Heat, as they had won 6 of the last 10 in Atlanta against the Heat before this series began. I don’t think Atlanta will win this series, but I do think they can at least make things more interesting. I will take the Hawks in Game 4.