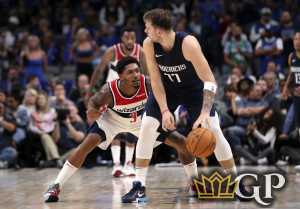 It is a busy weekend of NBA action with eight games on Saturday and seven on Sunday. We are coming off a very profitable 8-4 week, so we’ll look to continue the winning with weekend NBA best bets.

It is a busy weekend of NBA action with eight games on Saturday and seven on Sunday. The action on Saturday includes a good road test for Milwaukee as they visit Sacramento, while the Sunday schedule features three nationally televised games. The Lakers are at the Clippers on ABC, the Warriors at in Atlanta on NBA TV and the Magic are at the Nuggets on NBA TV. We are coming off a very profitable 8-4 week, so we’ll look to continue the winning with weekend NBA best bets.

Do you know when the last time the Cavaliers won a game in Miami? It was 2010. The Cavs have lost their last 19 games at Miami and it is not that much better against the spread, as they are 1-11 ATS in the last 12 in Miami. I will lay the points and take the Heat.

This one is not quite as good as the previous game, but the 76ers have won and covered the last six at home against Minnesota. The Timberwolves have not won in Philly since 2014. I will lay the points and take Philly in this game.

The Magic are just 2-8 SU in the last 10 in Utah. It has been a little better ATS, as the Magic are 5-5 ATS but this year’s Orlando team is not any good and Utah is one of the best teams in the league. I will lay the points and take the Jazz in what should be a rout.

The Bucks have won the last four in Sacramento and gone 3-1 ATS, but I still don’t trust Milwaukee on the road laying points. I think the much better bet in this one is the total. The last nine meetings between the teams in Sacramento have gone over. I will go over the total in this one.

It is hard to make any case for taking the Lakers if they don’t have James and Davis in the lineup. This is a statement game for the Clippers and they will want to punish the Lakers even though they are not at full strength. I will lay the points and take the Clippers.

There are not many instances where you want to take the Celtics but this should be one of them. The Hornets have not won a game in Boston since 2016. They have dropped the past seven in Boston and they are just 1-6 ATS. I will take the Celtics in this one.

The Warriors have taken 7 of the last 10 in Atlanta but they are just 5-5 ATS. Both teams badly need the win as each team is fighting to make the playoffs. It is hard to trust Golden State on the road, so I will take the Hawks at home in this game.

If there is one thing that happens with regularity in the NBA it is teams going into Denver with no rest and getting blown out. The Magic have the unenviable task of playing in Utah against a very good Jazz team and then going into the altitude of Denver and playing the Nuggets with no rest. It doesn’t help that Orlando is just 1-9 SU in their last 10 at Denver. I will lay the points and take the Nuggets in this game.