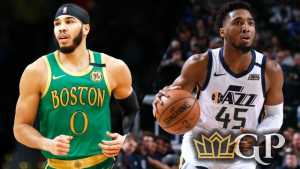 The Memphis Grizzlies visit the Houston Rockets in the first ESPN game on Wednesday night, while the Boston Celtics are in Utah to face the Jazz in the late game. Check out the latest Wednesday Night ESPN NBA picks.

The Rockets will be solid home favorites in this Wednesday night contest against the Grizzlies. Memphis is a young team that will do well just to hang on to the last playoff spot in the West, while the Rockets have visions of second place in the conference. Houston could be a dangerous team in the playoffs. They are playing a small ball style of basketball that seems to be working. The Rockets have a lineup of James Harden, Russell Westbrook, Danuel House, P.J. Tucker and Robert Covington. Head coach Mike D'Antoni has said the team can play small and win. Houston recently picked up Jeff Green and he loves playing in D’Antoni’s system.

"It's fun. When you have guys who can guard multiple positions, playing unselfishly, playing together, that's the right way to play," Green said to the media. D’Antoni said that his team can guard the post and rebound even though they don’t have size. “We have a strange team, where James is really good at guarding posts. So is Eric Gordon. Everybody we have can guard the post," D'Antoni said to the media, "We rebound just as well with the little guys, so it's weird -- it's a weird team. It helps Russell on offense, it helps James. So offensively we're better and should be -- theoretically -- we should be better defensively."

The Rockets are definitely all-in with small ball and D’Antoni has said as much in comments to the media. "We're gonna play small. We don't need to go big. Our team is better this way, and if we're gonna dive in, we might as well go all the way in," D'Antoni said. "You know, Tyson [Chandler] can play and we still have bigs, but for the most part -- and you know, we'll get pounded some -- but we'll just see how it works out."

There is no lookahead for the Rockets, as they have two days off after this contest before traveling to Boston. I just don’t think Memphis has enough to contain the Rockets, so I will lay the points and take Houston.

The Celtics could be a threat in the East, as they have a strong starting lineup that includes a player in Daniel Theis who goes under the radar. He averages just 8.7 points and 6.4 rebounds per game, but he had 25 points and 16 rebounds in a recent win over Minnesota. Theis is considered the glue that holds the lineup together and Brad Stevens uses him as the defensive stopper. The other four starters, Kemba Walker, Jaylen Brown, Jayson Tatum and Gordon Hayward say that Theis is a huge key to their success. “He wants to win and he makes all of us better, and that’s something that doesn’t always show up in the stat sheet and you have to really watch the game to understand the kind of impact he’s able to have on games.” Hayward said to the media.

Boston has won six of the past ten in this series, but the Jazz have won the last two. The teams have split their last ten in Utah, with seven of the last ten going over.

This is a bad spot for Boston, as they will be playing their third game in four nights and with no rest, as they were in Portland on Tuesday. Utah is in a much better spot having played at home on Monday vs. Phoenix and then having Tuesday off. The situation definitely dictates a play on the Jazz on Wednesday night.