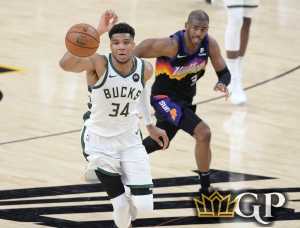 The Milwaukee Bucks return home to the Fiserv Forum for Game 3 looking to avoid falling into an 0-3 hole against a Phoenix Suns team that’s simply just been better than them to this point of the series. Let's look at NBA Finals Game 3 Picks.

The Milwaukee Bucks return home to the Fiserv Forum for Game 3 looking to avoid falling into an 0-3 hole against a Phoenix Suns team that’s simply just been better than them to this point of the series. Phoenix parlayed a huge advantage at the free throw line to come out victorious and cover the closing NBA odds in the series opener. When the teams met again on Thursday night, it was the Suns brilliant long range shooting that made life a living hell for Giannis Antetokounmpo and company right from the opening tip. Eighteen of the Suns first 20 points were scored from beyond the arc! Phoenix has shot 47 percent and 49 percent from the field in the first two games. If Milwaukee can’t figure out a way to rectify that situation, this series could be done in short order with the Suns hoisting the first Larry O’Brien Championship Trophy in franchise history.

Linemakers are letting it be known just how important home court advantage is in this series. After going off the board as 5 and 4.5-point underdogs and losing the first two games by an average of 11.5 points per game, the Bucks opened 4-point favorites to win Game 3 and get back in the series. At least initially, the betting markets begged to differ by loading up on the Suns enough to push the number to beat down a half-point to -3.5. An interesting line move to say the least considering Milwaukee has gone 7-1 SU and 5-3 ATS in its eight playoff games as hosts. The over cashed in the first two games to move it to a perfect 4-0 in the team’s four overall meetings both in the regular season and playoffs. After going off the board at 219.5 and 221, the impost opened 222 for Game 3 and has already been bet up half a point.

The Suns dropped 118 points in each of the first two games of this series. Devin Booker led the team in scoring both games going off for 27 points on 8-of-21 shooting in the opener and followed it up with 31 more in Game 2 by way of draining 7-of-12 shots from beyond the arc. The starting five accounted for 86 percent of the teams points on Thursday night. So far, Milwaukee hasn’t been able to contain either of Phoenix’s three stars. Though Chris Paul just failed to surpass his 35.5 points, rebounds and assists prop, he did so by the slimmest of margins with 23 points, eight assists and four rebounds. While the Bucks did a better job defending Deandre Ayton in the rematch, he’s still averaging 16 points and 15 rebounds per game.

It was shocking to see Giannis return to the floor in the opener. While he looked a bit lethargic in the 15 point loss, he still put up 20 points and reeled in 17 rebounds to help his team win the battle of the boards. While it wasn’t enough to lead the team to victory, at least he was back on the hardwood and looked healthy. If there were any questions as to if he was truly ready to return and not pushing it, “The Greek Freak” would erupt in Game 2 with a game-high 42 points on 15-of-22 shooting. His 12 rebounds also led the way. Unfortunately, he didn’t get much else in support with Jrue Holiday clocking in as the second leading scorer with 17 points. Khris Middleton had an extremely quiet 11 points and converted just 1-of-6 shots from deep; not good!

If you think the Bucks have any shot of coming back and making a series of it, you best get a piece of them on the current series odds that find them clocking in with a better than 4-1 return. Personally, I’m having a hard time envisioning a Milwaukee comeback as dominant the Suns have been on their home floor both in the regular season and playoffs. Even if Milwaukee wins the next two games, the Suns will still be decided favorites to win the series with two of the final three games being played in their arena. Phoenix’s ability to defend the 3-ball (No. 5) and knock it down itself (No. 7) has proven to be quite the boon to the Bucks achieving any type of success. They just don’t have the overall athletes to compete with what Phoenix wants to do for a full 48 minutes. With that, I’ll take the points with the Suns in Game 3 and also throw some beer money on the moneyline and parlay it with some MLB or UFC to make for an exciting Saturday night!