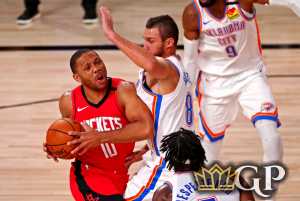 The Oklahoma City Thunder was thoroughly embarrassed in the series opener against the Houston Rockets. While Game 2 was a much different story through three and a half quarters, the end result was more of the same with Houston winning going away. Even on a night that James Harden shot miserably from the field and Russell Westbrook was riding the pine due to a strained quad, OKC simply didn’t have enough in the tank to even the series. With that, the Rockets now find themselves installed -1000 chalk to close this series out after initially hitting the board at -250. One can only imagine how disheartened the Thunder is right now to be down 0-2; especially Chris Paul who was traded for Westbrook who hasn’t been needed for Houston to take the commanding series lead. Will CP3 will his team to a dub in Game 3, or will it just be another run of the mill triumph in the recent rivalry for the Rockets?

The Thunder actually won the regular season rivalry by taking two of the three meetings both SU and ATS at online sportsbooks. Their “MO” towards doing so eerily resembled the effort put forth in Game 2 in which they limited the Rockets from scoring and shot a high percentage from the field themselves. Though the Thunder shot 44 percent to the Rockets 42 percent in Game 2 and got a huge game from Shai Gilgeous-Alexander, it proved to simply not be enough. The under cashed in each of the Thunder’s regular season triumphs over Houston, and did so once again in Game 2. However, Oklahoma City now knows that it’s going to need to fill the hoop with basketballs in order to get the best of a Houston team that’s been firing on all cylinders offensively since the bubble restart.

Though Houston went on to drop its final three seeding games, there arguably wasn’t a more impressive team that qualified for the playoffs than that of Mike D’Antoni’s squad. They took down the Dallas Mavericks in a marathon overtime thriller, disposed of the Milwaukee Bucks in a competitive match that went down to the wire, fell to Damian Lillard and the Portland Trail Blazers immediately after, and then skunked both the Lakers and Kings to cover the closing NBA odds as modest sized favorites. The three straight losses to the Spurs, Pacers and 76ers weren’t ideal, but they were already locked into the No. 4 seed. The losing streak hardly mattered as it’s gotten past the Thunder in the first two games of the series with relative ease.

The Thunder fought tooth and nail to become the No. 4 seed in the West fending off both the Rockets and Jazz for the valued spot. This is a team that alternated wins and losses both SU and ATS in all eight of its seeding games. Though two of those defeats came in overtime against the Clippers and Nuggets, it still doesn’t change the fact that there’s been absolutely no consistency. That was the case throughout the regular season as well with the team’s longest win streak checking in at five games. Whether it’s the coaching or the personalities on the roster not meshing with one another, it will need to be figured out in the offseason as soon as possible because this team isn’t challenging for any sort of title the way it’s currently assembled.

NBA bettors have already seen the Thunder shoot 44 percent from the field in both games of this series. The end result was a pair of defeats both SU and ATS. Simply put, Oklahoma City just doesn’t have the firepower to compete in this series. A quick look at the box scores for both games tells you all you need to know about how this series will ultimately play out. OKC’s two best players – Paul and Stephen Adams – were -26 and -36 respectively in Game 2. Each carried negative +/- rates in Game 1 as well. They’re the lifeblood of the Thunder yet each has put forth a clunker the first two games of the series.

Personally, I was pretty shocked that oddsmakers lined the Rockets so short to win this series. It should’ve been closer to -350 in my opinion regardless of whether Russ suited up for a single game or not. After going off the board as a 1-point dog in Game 1 and a 2-point favorite in Game 2, linemakers now have the Rockets installed 3-point chalk to take a commanding 3-0 series lead. However, this looks to be as good a spot as any for the Thunder to put forth a “Circle the Wagons” type effort and save some face. I recommend taking a small position on OKC plus the points right now and hope the betting public drives the line up a bit more before tip-off to get a little more. The Thunder will be the more determined of the two teams on Saturday.