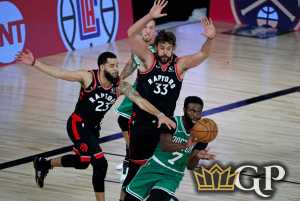 Bet on the NBA at the online sportsbook. Here you can find team information, opening lines, NBA schedules, and NBA odds. Check out Bitcoin gambling options and join us today!

Forget about OG Anunoby’s last second three-ball that allowed for the Toronto Raptors to get back into the series in Game 3. Most impressive about the win and non-cover was the ability of Nick Nurse’s team to not let the game get away from them after trailing by 10 points at the half. Down 2-0 in the series, most teams would’ve likely folded their hand and just went through the motions the rest of the way; not the defending champs! Even so, the Boston Celtics know full well that it took a miracle finish for the Dinos to finally get the best of them. With that, you can be pretty certain Jayson Tatum and company hit the hardwood for Game 4 determined to take back the game that was stolen away from them with less than half a second remaining in the game. Shockingly, online sportsbooks still have the Raptors installed 1-point favorites with the total lined at 213 for Saturday night’s throw down.

When I saw the shot, the first thing that came out of my mouth was “ice water.” That’s exactly what Anunoby had flowing through his veins after knocking down the game winner from deep to trim the Celtics lead in the series to 2-1. Even more impressive was the way in which he reacted to the shot going down; he didn’t even flinch! The triumph put an end to the Celtics three-game win streak in the recent meetings, but Boston will however enter Game 4 having covered each of the last four as well as eight of the last 10. Each of the first three games of this series played to a low scorer with an average of 204.7 points scored. With that, oddsmakers opened Game 4 up at 213 which is 4.5 points lower on average than the first three games combined. This rivalry has been an under bettors dream in the bubble with it cashing in at a 3-0-1 clip.

Many were extremely worried as to what the Raptors offense was going to look like with Kyle Lowry working at less than 100 percent. He put nearly 35 minutes under his belt in Game 1, and followed it up with another 40+ minutes in Game 2. He combined for an average of 16.5 points, 7.5 assists and 5.5 rebounds in those games. The ankle looked to be much better in Game 3 after the All-Star point guard went on to convert 13 of his 23 attempted shots for a game-high 31 points and added eight assists and six rebounds. He also logged a series-high 46+ minutes of game action. With Lowry seemingly back to full health and Fred VanVleet also doing his thing, Toronto once again has the backcourt to compete with the Celtics. If only Pascal Siakam could figure things out already!

In falling at the gun on Thursday night, the Celtics saw their 10 game win streak come to a gut-wrenching halt. Once Jaylen Brown found Daniel Theis for an uncontested dunk with half a second remaining, it looked like the Celtics were well on their way towards taking a dominating 3-0 series lead. But it wasn’t in the cards. Shockingly, Boston looked clueless on the inbounds play with Jayson Tatum and Theis running around with their heads cut off which allowed Anunoby to camp out all alone in the corner and situate himself for the uncontested game winner. A shocking display of events considering how well Boston’s defense has played throughout this series. On the bright side, the offense was able to limit the amount of turnovers. After coughing it up a total of 39 times in the first two games, it only did so 14 times in Game 3. Now that this is a series again, ball security is going to be crucial moving forward.

In all honesty, I’m not entirely sure the last second defeat is going to faze the Celtics. As already stated, it took a miracle for the Raptors to win Game 3. It happens. Best thing to do is sweep the bitter defeat under the rug and press on. Boston has already drained 47 percent of its shots in two games this series, and has won the battle of the boards in every game. Lowry and VanVleet were the story of Game 3 with the duo combining for 56 points, 14 assists and nine rebounds. Knowing that Lowry now looks to be 100 percent, I fully expect Brad Stevens to devise something that allows for his defense to limit the Raptors best player. With the Celtics doing seemingly as they please offensively against one of the league’s supposed best defenses, I see no reason to reverse course here. I called for the Celtics to win this series in six games, and I expect them to take a step forward in doing just that on Saturday night.