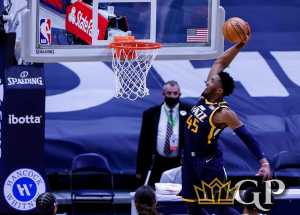 There are a lot of games on national television for the week of March 15-21, but it should be noted that because of the NCAA Tournament, a lot of the games are on NBA TV. We’ll begin our NBA best bets by looking at the two TNT games on Tuesday, March 16 and we’ll wrap up our coverage by looking at the two NBA TV games on Sunday, March 21.  Let’s get started with this week’s NBA best bets.

This series used to be all Celtics, but no longer, as the Jazz have won the last three in Boston, with two of the three going under the total. The Jazz are definitely the better team this season and I will take them in this matchup.

I have no confidence in the Blazers laying points. They have also dropped five of the last seven in this series in Portland straight up and against the spread. I will take the Pelicans plus the points.

This is a show me game in the Eastern Conference and the Bucks will want to prove they are the team to beat. They have also won 7 of the last 10 at Philadelphia. I will take the Bucks in this game.

The Clippers have won five of the last six in this series and there is no reason Los Angeles won’t continue that success on Wednesday. I will take the Clippers in this game.

The Wizards are simply a bad team going nowhere. The Jazz are one of the top teams in the league and although this is a letdown spot, I can’t take Washington. The Jazz have also won the last four in Washington. I will take the Jazz minus the points.

I would lean toward taking the points with Charlotte, but the better bet might be the total. 7 of the last 10 meetings in Los Angeles have gone under the total. I will take this game under.

I want no part of the side in this one, as I don’t trust either team, but the total is definitely worth a look. Neither of these teams plays defense and the last five meetings in Portland have gone over. I will go over the total in this one.

This is a huge game in the Western Conference, as both teams are just outside of a playoff spot. Both teams have actually played better on the road, so I will take the Warriors in this one.

The Wizards are a bad team, but I want no part of laying points with the Nets. The total could be worth a look in this one, as seven of the last ten meetings between the teams in Brooklyn have gone over the total. I will go over the total in this contest.

The last game we’ll look at has the Lakers visiting the Suns. The Suns are actually right with the Lakers for second place in the Western Conference, so this is a huge game. The teams met in Los Angeles a couple of weeks ago and the Suns won by a score of 114-104. It has been a road team series of late, as the Lakers have won five of the last six in Phoenix. This has also been a high scoring series in Phoenix, with 8 of the last 10 going over. I will make two plays in this one and take the Lakers and the game over the total.