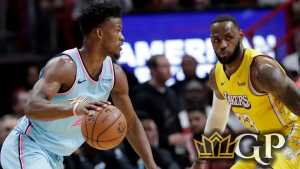 The Los Angeles Lakers are solid favorites against the Miami Heat in the 2020 NBA Finals. Let’s look at the latest NBA Finals odds, the schedule and an NBA Finals pick.

The Heat were very impressive in the Eastern Conference, rolling over Indiana, dominating Giannis Antetokounmpo and the East-leading Milwaukee Buck and taking out the Boston Celtics in six games in the Eastern Conference Finals. Miami doesn’t have the star power of the Lakers, but they do have Jimmy Butler and Bam Adebayo. They also have former All-Star Goran Dragic and rookie Tyler Herro. They also have experience, as they have Andre Iguodala. who is a former Finals MVP. The Heat are also extremely well coached, as they have Erik Spoelstra who you can make a case is the best coach in the NBA.

The Lakers are led by LeBron James and Anthony Davis. The Lakers do not have as many good supporting players, so they need James and Davis to carry them.  The Lakers haven’t needed much help from the other players, as James and Davis are averaging a combined 55.5 points, 19.6 rebounds and 12.5 assists per game. The Lakers routed the Blazers in the playoffs, struggled against Houston and got past Denver in the Western Conference Finals.

The Lakers beat the Heat in both regular season meetings, but they mean little as each took place early in the season before the pandemic and before the Heat added Iguodala and Crowder.

This series is going to be decided by two matchups. It will be Anthony Davis going up against Bam Adebayo and LeBron James going against Jimmy Butler. Both matchups should be fun to watch and they are not as lopsided as you might believe. James and Butler have gone against each other 34 times and each player’s team has 17 wins.

I would love to see the Heat win this series and they are not without a chance. They need Adebayo and Butler to at least keep their matchups against Davis and James reasonably close. The Heat don’t have to win those matchups, they just can’t get routed. Miami is the better 3-point shooting team and they can beat the Lakers if they can keep Davis and James from going crazy.  The Heat are 8-0 when shooting 37% or better from 3-point range.

The problem for Miami is that the Lakers have two players who can take over a game at any moment in James and Davis. You have to think that one of those two players will have at least a couple of games where they dominate. The Heat have to find a way to win the other three games and then hope to get the series to a seventh game where anything can happen. There is definitely no value in taking the Lakers are odds of more than 3-1. The best option would probably be to play the series game by game and take the losing team to bounce back.