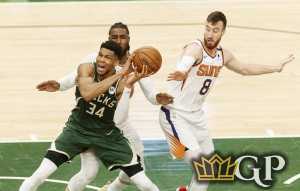 The Milwaukee Bucks are slight favorites against the Phoenix Suns in Game 4 of the NBA Finals on Wednesday night on ABC. Let’s look at NBA Finals Game 4 odds and picks.

The Milwaukee Bucks are slight favorites against the Phoenix Suns in Game 4 of the NBA Finals on Wednesday night on ABC. The Bucks got back into this series by winning 120-110 at home on Sunday night, as Phoenix now leads the best-of-seven series 2-1. The Bucks got a huge game from Giannis Antetokounmpo, who finished with 41 points, 13 rebounds and six assists. He got some help, as Jrue Holiday had 21 points, nine assists and five rebounds, while Khris Middleton added 18 points, seven rebounds and six assists. Chris Paul led the way for the Suns with 19 points and nine assists, while DeAndre Ayton added 18 points and nine rebounds. Let’s look at NBA Finals Game 4 odds and picks.

Phoenix dominated the first two games of this series, but Milwaukee controlled Game 3.  There is no doubt that the Suns need to do a better job on Giannis. He dominated Game 3, becoming just the second player in NBA history to have 40 points or more and 10 rebounds in consecutive games in the NBA Finals. Giannis has 103 points in the first three games, fourth-most in NBA history.

The Suns didn’t get much from one of their stars in Game 3, as Devin Booker had just 10 points. He was 3-of-14 from the floor and never got into any kind of rhythm. "I think I can get better [shot attempts]," Booker said to the media, "We'll make that happen. The point of the game is to win it, and I think there were other things that went on throughout the game. You can say it's a make/miss game, but at the end of the day you have to make the other team miss and get easy opportunities for your team. We didn't do that tonight."

The Suns also had major trouble on the glass, as Milwaukee was the more physical team. The Bucks had 13 offensive rebounds and Milwaukee was more aggressive, getting 26 free throw attempts to just 16 for the Suns.

Phoenix head coach Monty Williams said that the officiating wasn’t very good. "I'm not going to get into the complaining publicly about fouls," Williams said to the media, "Just not going to do that. But you can look -- we had 16 free throws tonight. One person had 17." Giannis had 17 free throws and he made 13 of them. The Bucks went 20-for-26 from the line, while Phoenix was 11-for-16. The Suns were hurt when Ayton got into foul trouble. He scored 16 points on 7-for-9 shooting in 20 minutes in the first half, but he finished with just 18 points in 24 minutes after getting five fouls.

The Bucks had almost everything go their way on Sunday, as Giannis had a big game, Booker was terrible and the refs seemed to favor the Bucks. It is hard to see everything going the way of Milwaukee again on Wednesday night. Phoenix has been exceptional coming off a loss and in this case they are getting four points. I expect the Suns to bounce back in a big way and at least cover the spread with a straight up victory a strong possibility.