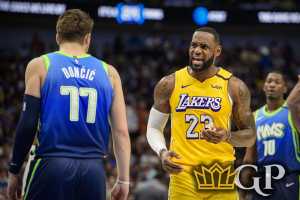 The Dallas Mavericks visit the Los Angeles Lakers on Friday night on ABC and ESPN. It is a high-profile matchup of superstars on Friday with Luka Doncic leading the way for the Mavericks, while the Lakers feature the duo of LeBron James and Anthony Davis.

The Dallas Mavericks visit the Los Angeles Lakers on Friday night in a game that can be seen on ABC and ESPN. The Mavericks are coming off a game against Phoenix on Wednesday night, while the defending champion Lakers were beaten in their opener by the Clippers on Tuesday night. It is a high-profile matchup of superstars on Friday with Luka Doncic leading the way for the Mavericks, while the Lakers feature the duo of LeBron James and Anthony Davis. Let’s look at this matchup for Friday and NBA picks.

The early line on this game has the Lakers listed as a 6-point favorite. This game has start time of 8 p.m. Eastern on Friday night and will be shown on ABC and ESPN. The Mavericks are not coming in at full strength for this game, as forward Kristaps Porzingis is out until early January with a knee injury. That will put even more pressure on Doncic to carry the scoring load.

The Mavericks went out and got Josh Richardson in the off-season and he could have a career season playing alongside Doncic. Dallas also has Tim Hardaway Jr. who averaged 17.1 points per game last season. The Mavericks will need scoring from Doncic, Richardson and Hardaway early in the season with Porzingis out of the lineup. The frontcourt is more about defense with Dorian Finney-Smith and Dwight Powell.

The Lakers are coming off an opening loss to the Clippers in a game in which their defense was terrible. The Lakers got 22 from James and 18 from Davis but head coach Frank Vogel limited the minutes of both players, as James played 28 and Davis played 31. "It's not ideal, but I do feel it's necessary to manage those guys' minutes the right way," Vogel said to the media, "Getting through this stretch healthy is a priority, and evaluating how our new guys fit is a priority when we haven't had a normal amount of time to do that. The five guys on the floor have got to be better than they were tonight." James turned his ankle in the second half of the game but he said he will be fine for Friday’s matchup against Dallas.

The Lakers have a much different supporting cast than they had a year ago and it was a mixed review. Montrezl Harrell had 17 points and 10 rebounds, Dennis Schroder had 14 points, 12 rebounds and 8 assists, but Marc Gasol had no points and five fouls in 12 minutes of play, while Wesley Matthews went scoreless.

The Lakers have a number of advantages for this game, as they will be playing with an extra day of rest, at home and against a Dallas team that simply doesn’t matchup well with them. I was a little surprised when the opening number on this game came out at just six. I thought the Lakers would be closer to an 8-point favorite. Los Angeles will not want to start the season 0-2 and I expect a more focused effort out of the team on Friday. The Lakers started so poorly against the Clippers that it made it hard to dig out of the huge hole. I don’t see them getting into that kind of trouble against the Mavericks. The Lakers have covered the spread in five of the last six meetings in this series and I think they are the clear choice to win and cover this game on Friday night.